Tracing the 12,000 Year Pedigree of Beer 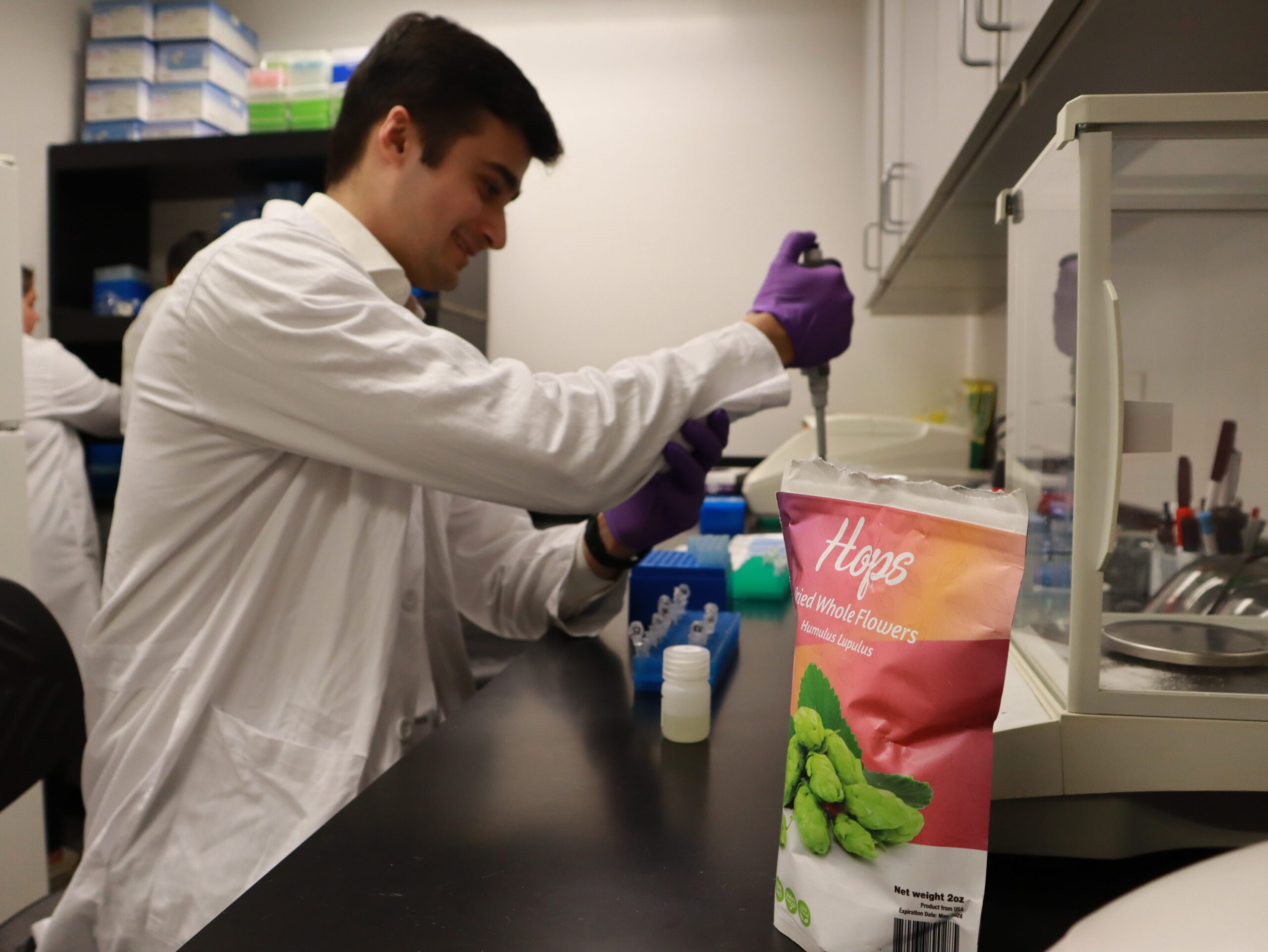 SDSU population geneticist Arun Sethuraman and evolutionary biology Ph.D. student Alex Adame are an unlikely pair to be studying how the genetics of hops have changed throughout 12,000 years of history: neither of them drink beer.

“I might have a hops allergy,” said Adame, which, in addition to her being pregnant, makes systematically sniffing (for science) dozens of pungent pellets of the key beer ingredient a little nauseating.

But answering the infinite questions about how hops’ genes influence drought tolerance, resistance to pests, and ultimately the flavor of beer motivates her through the mild discomfort.

With funding from the U.S. Department of Agriculture, Adame and Sethuraman are sequencing the genetic code of hundreds of varieties of hops with the goal of understanding the past and future of beer.

Unlike staple cash crops (such as rice, corn, and wheat) whose genomes are well-documented in order to maximize production for an increasingly growing populace, little is known about the genetic factors and environmental conditions that enhance desirable attributes of hops. But the plant, scientifically known as Humulus lupulus, may be just as important to human history.

“We evolved with hops,” Adame said. “Hops is really coevolution. As we learned to domesticate plants, we could have larger population sizes and cities.”

Mashing up hops’ cone-shaped flowers in vials like miniature mojitos will help untangle whether the earliest domestication of the plant dates back to ancient China or Mesopotamia and answer how the plant evolved as a result of intercontinental travel.

“No one has looked at the intersection of colonization and hops,” Sethuraman said. He will use similar whole-genome sequencing techniques from his previous projects tracing so-called ‘ghost’ DNA from humans’ African ancestors.

This will enable the researchers to follow the genetic threads forward to modern craft brewers’ experimentations.

Few varieties of hops have a clear, documented lineage like those of purebred race horses or dogs, making it hard to predict whether pollinating hops used in German hefeweizen with those that distinguish Japanese Sapporo, for example, might result in a more or less bitter or earthy flavor profile.

Beyond the lab, Sethuraman is already in contact with San Diego-based hops farmers who sell their crop to Stone Brewing to help develop more drought-tolerant and virus-resistant strains.

Adame is excited to draw on local brewers’ expertise about why and when they choose to add in hops and how they expect those decisions to affect aroma and flavor. Correlating craft brewers’ hypotheses with SDSU’s genetic data will benefit the industry on the whole.

On campus, Sethuraman and Adame plan to involve students extensively in this project through a hands-on genetic analysis course and in the lab. They will train the next generation of scientists contributing to San Diego County’s nearly $3 billion agricultural economy.

“A blender was my first toy,” said Ali Shah, a fourth-year pre-med student and one of Sethuraman’s undergraduate research assistants. “I would chop up plants and put them in the blender. And I do that now for science.”

Unlike his mentors’ avoidance of beer, Shah will occasionally imbibe, much preferring a hop-forward IPA to any can of Coors.