To Repair a Damaged Heart, Three Cells are Better Than One 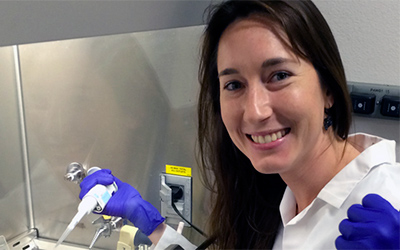 CardioClusters use three types of cells to reduce scar tissue and improve function by integrating into and persisting within damaged heart tissue.

Cell therapy for cardiac regeneration, while promising, has been hampered by issues with long-term survival of the transplanted cells. Now, a technique that combines three different types of cells in a 3D cluster could improve its efficacy in reducing scar tissue and improving cardiac function after a heart attack.

Called CardioCluster, the bioengineering technique was developed by Megan Monsanto, a recent doctoral candidate who worked with Mark Sussman, distinguished professor of biology at the San Diego State University Heart Institute. They found there is strength in numbers, even in cell therapy.

Their research shows the cell clusters improve heart function because they have much better retention rates compared to single cell injections — the clusters persisted inside the heart walls of mice models for as long as five months after transplantation, a significant advancement.

As a master’s student in bioengineering at SDSU, Monsanto became very interested in tissue culture of cells for cardiac research. This led her to Sussman, a molecular biologist and longtime principal investigator at the institute.

When she learned about the challenges in getting injected cells to persist and survive inside the heart walls, she came up with the idea of a 3D cluster of cells that would interact with each other and stick together. But even she was surprised at how long they survived as a cluster.

“At 20 weeks we were still able to see the cells,” Monsanto said. “Our design takes advantage of the inherent beneficial attributes of three distinct cardiac cell types, each known to possess beneficial properties that blunt heart disease in their own unique way.”

The cluster combination she arrived at after extensive research comprises mesenchymal stem cells which help communicate and support other cells, endothelial progenitor cells which line the insides of blood vessels, and cardiac interstitial cells which are key to forming cardiac tissue. The study was published in Nature Communications in August.

Working in the Sussman lab with human heart cells surgically implanted into the hearts of immune-compromised mice, she genetically modified the transplanted cells to express a fluorescent tag to enable tracking. Each cell type has a different tag or color, so weeks later when she tracked them, all three color tags were consistently found by confocal microscopy imaging.

One reason for their high rates of retention and longevity is that they were cultured together before injection, and this familiarity maximizes cell-to-cell interaction.

”When you need to go into a bad neighborhood, it’s better to go with some friends,” Sussman explained. “Since these cells talk to each other, they support each other when they enter the hostile environment of the damaged heart.”

CardioClusters closely mimic the natural environment within the human body much better than 2D cultured single cells that are easily pumped out of the heart. Their larger surface area as a cluster helps with retention.

“The tougher cells naturally go to the outside while protecting the slower growing cells in the center,” Sussman said. “The cells seem to know what to do and they spontaneously figured out how to assemble within the cluster.”

When Monsanto subjected the cluster cells to stress tests, the outer cells survived better. But when tested separately, about 50% of the cardiac interstitial cells died.

Each cell type within the cluster plays a specific role – the mesenchymal stem cells are the glue, the cardiac interstitial cells are the brain, and the endothelial progenitor cells are the highway on which nutrients travel which keeps the cluster alive, she explained.

The clusters can be modified and optimized for different needs, and cell ratios can be tweaked, which will form the next step in their research.

“While there are many who are skeptical of cardiac cell therapy, it’s important to try innovative approaches like CardioClusters to build upon what we have learned and improve outcomes rather than becoming frustrated and giving up,” Sussman said.

“For more than a decade, a major limitation of cell therapy has been that the cells don’t stick around so the effectiveness of treatment is lost. With this approach, we get significantly better recovery and repair, and we are able to see the cells months later, which is groundbreaking.”

Sussman’s research is funded by the National Institutes of Health, and Monsanto received fellowships from the Rees-Stealy Research Foundation, the Inamori Foundation and the Achievement Rewards for College Scientists (ARCS) Foundation.