Stepping Up By Looking Back 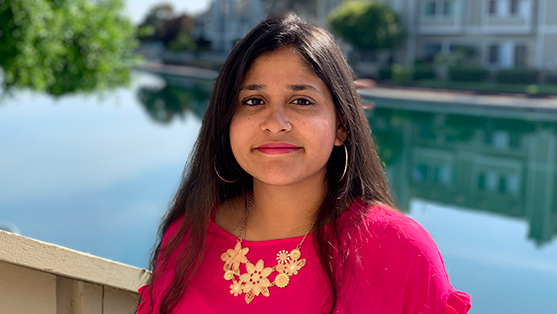 Alumna Aprajita Mathur is a standout in the profession of software testing.

To become recognized as one of the top women in her field, Aprajita Mathur (’11) needed only to follow one of her own rules in life.

Mathur learned software testing in India, where she grew up and earned a bachelor’s degree in biotechnology at Birla Institute of Technology, Mesra. When she came to San Diego State University she delved into bioinformatics, the blend of biology, computer science and other fields that is driving countless advances in genetic research and the treatment of disease.

Mathur’s graduate education was geared toward a career in bioinformatics software development, where the writing, designing and coding of programs is performed. Once she earned her master’s degree and entered the business world, she realized her heart was really in a sphere that some peers and family members regarded as less prestigious.

“I was an OK developer at a decent job,” she said, “but while I was in that job I realized that I’m an awesome tester.”

Which brings us to one of her rules for anyone either starting fresh or still trying to figure out a path in life.

“Explore and really find out what you like to do versus what the normal thing is,” Mathur said in a telephone interview from her office as bioinformatics software test manager at Guardant Health, a Redwood City company developing alternatives to traditional tissue biopsies for cancer. “Don’t restrict yourself.”

For Women’s History Month in March, the Silicon Valley company LogiGear named Mathur one of the top women in software testing. The company noted many of the women had to overcome hurdles that include a gender cap and a perception that “testers aren’t valuable.”

That’s hardly the case with the work done by Mathur’s team. Guardant Health, which she joined in April 2018 after more than seven years with San Diego-based Illumina, is developing what it refers to as liquid biopsies. The technique aims to detect cancer through simple blood draws, reducing the risk and invasive nature of more traditional techniques requiring surgery.

“The thing about bioinformatics (is) it’s just not one area of study, you have to juggle a couple of balls,” Mathur said. “The BMI (Biological and Medical Informatics) program at SDSU is very competitive and well thought-out and provides you opportunities to learn subjects you may not have exposure to. If you’re a biology student, you will be studying courses in computer sciences and statistics because those are crucial for your path in the field.”

She credits Faramarz Valafar, a professor of computer science, with supporting her interest in the subject that became her career.

As a woman in a male-dominated field, Mathur said the hurdles began early. “It may not be true for all regions in India, but where I come from, girls get married early or once they finish their bachelor’s degree. A bachelor’s degree in STEM is uncommon and so is traveling outside your hometown to study. I would definitely put all the credit in my parents,” she said.

Mathur said software testing requires an ability to see both the big picture and its intricacies, and it appeals to her in what she described as a tendency to set high standards for herself as both a professional and the mom of a boy who turns three in July.

At Guardant, software is used in clinical laboratories to process patient samples, analyze their genomic profiles and find clinically relevant genomic information. This information is then used in finding the best treatment options for the cancer patient.

The technology has implications for early and late stage cancer detection, and Mathur can’t help but turn her perspective to the big picture here, too.

End results also figure into one of Mathur’s other rules of life. She calls it the scale rule.

“I still have a hard time fixing my scale,” she said, “but I try more consciously to be more realistic of it than otherwise.”