Gathered in the lab of San Diego State University professor Faramarz Valafar, more than a dozen graduate students and research assistants focus on the most deadly pathogen on the planet.

They analyze the genome of Mycobacterium tuberculosis, the bacteria that cause the contagious respiratory disease tuberculosis. Their goal: to determine how a pathogen with such a static genetic makeup could engineer such quick, inventive, and effective ways of becoming resistant to drugs.

The work is being conducted under a five-year, $3.1 million grant to Valafar from the National Institutes of Health (NIH) to study the DNA and gene expression of tuberculosis, while developing ways to identify resistant bacteria and predict the success of treatment. It follows $3 million of initial funding from NIH in 2013.

The lab’s work is urgently important for millions of people suffering from the disease. In 2016, 1.7 million people died from tuberculosis, according to the World Health Organization (WHO), and incidents of drug resistance are on the rise, especially in impoverished countries.

“Studies like this, which help to understand all the different ways that bacteria can become resistant to various drugs, are sorely missing, hugely needed, and severely underfunded,” said Valafar, a computer science professor and principal investigator of the study.

Valafar’s study uses DNA from samples collected in Belarus, where an estimated three-fourths of tuberculosis patients are resistant to multiple antibiotics.

Drug resistance in countries like Belarus is caused by a bevy of factors, including the over-the-counter availability of antibiotics; their low quality; and their misuse. This gives the disease plenty of opportunity to adapt–or mutate.

Most mutations happen in just one of the roughly 4.4 million points along the genome. Most of these cases can be treated by alternative drugs released in 2017 by WHO, which were created specifically to address cases of resistance.

However, in up to 20 percent of cases the mutations that cause resistance are far more complicated. In earlier research, Valafar and his lab discovered that, in response to drug exposure, a portion of the tuberculosis genome can be removed, flipped backwards, and re-inserted— a structural variation that health providers cannot identify or treat with existing diagnostic methods. The inability to treat these cases allows tuberculosis to evolve and become more resistant.

Physicians are finding that tuberculosis is quickly adapting to the alternative WHO drugs as well. Already patients have died because the new antidotes were not able to eradicate their disease.

“It took us 40 years to develop new drugs; it took the bacteria a matter of months to come up with an answer to the new drugs. It’s a losing battle we are in right now,” Valafar said. “Right now we are just pushing the bacteria to evolve. We are not really stopping it.” 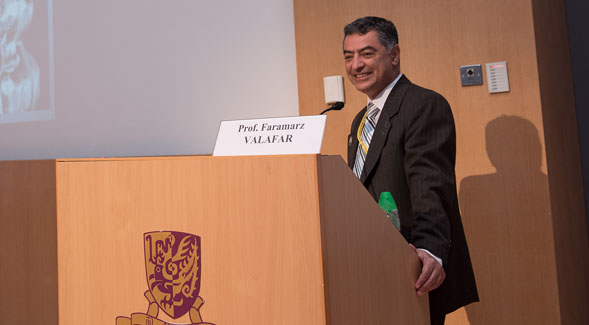 Stubbornly, Valafar and his team continue to make progress, uncovering long-held mysteries of tuberculosis that may lead to diagnostic devices for effectively treating even the most resistant strains of the disease.

Scientists still do not know how a large portion, about 40 percent, of the tuberculosis genome functions. Already, the lab has discovered that some of this genetic “dark matter” is responsible for helping the bacteria develop excess cell wall proteins when faced with a hostile environment, making it difficult for drugs to penetrate.

As his research progresses, Valafar hopes to develop an in-field device that will help identify whether a patient’s tuberculosis has mutated, and in what way, which would allow doctors to respond quickly to incidents of resistance.

“If we are successful, we will be able to develop a far more comprehensive way of catching the unusual versions of the disease that evade detection and continue to spread,” he explained.

It’s this ultimate goal–the hope of one day subduing the oldest pathogen on earth and reducing sickness and death as a result–that motivates many of the scientists and students in Valafar’s lab.

“It’s an incredible privilege to be able to sit in a chair at a computer and make tangible progress toward understanding the bacterial pathogen responsible for more human death than any other,” said Sam Modlin, a research scientist in Valafar’s lab. “It makes coming in to work each day truly exciting.”