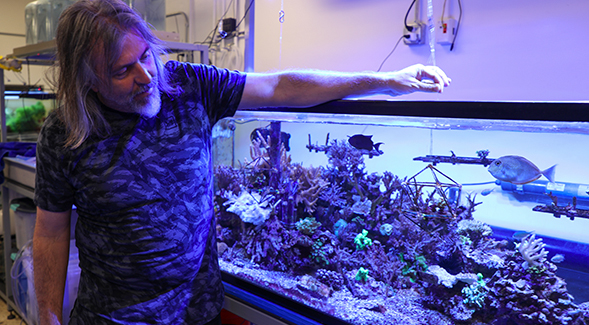 For more than 20 years, Forest Rohwer has been diving, exploring and studying coral reefs in tropical waters around the world. The San Diego State University viral ecologist is particularly interested in viral symbiosis, a process by which organisms and ecosystems adapt to changing conditions by forming ecological units with different viruses.

He is one of 15 scientists from different research institutions around the world chosen by the Gordon and Betty Moore Foundation to receive investigator awards to pursue research under the Symbiosis in Aquatic Systems Initiative (SASI). This vibrant international cohort with deep expertise in their respective fields will receive five years of unrestricted support to pursue innovative research that has high potential for significant advances in aquatic symbiosis.

“The investigator awards are expected to push the frontier of aquatic symbiosis research by providing ample support for brilliant scientists who will take risks that drive creative work,” said Sara Bender, program officer of SASI.

Rohwer will receive $2 million to explore whether there are a set of viral genes that will help coral reefs adapt to climate change conditions such as warming ocean surface temperatures and ocean acidification. The viruses he studies are bacteriophage, which infect and replicate inside bacteria, and can be both evolutionary agents as well as opportunistic pathogens.

“I hope to find a natural reservoir of resistance mechanisms in the coral, and characterize both the bacteriophage and the process, and use it to treat coral on a large scale,” Rohwer said. “The Moore Foundation award is an exploratory grant that allows researchers to come up with a hypothesis, and explore new and unusual areas of symbiosis in marine biology.”

The preliminary work will be done in pilot scale aquariums in his lab at SDSU, and field testing and observations will happen in the U.S Protectorate islands in the Central Pacific, and in Sri Lanka. The islands have some of the most pristine coral reefs in the world and Rohwer will examine what helps them thrive and how to replicate it elsewhere. He chose Sri Lanka because the South Asian island nation offers rich biodiversity but has also been impacted by anthropogenic activities.

SDSU’s president Adela de la Torre praised Rohwer. “Dr. Forest Rohwer has dedicated his career to exploring and understanding coral reef microbial ecology. We are very proud to see his contributions to the field recognized by this prestigious investigator award from the Gordon and Betty Moore Foundation, which will further support his efforts to counter the effects of climate change on coral reefs.”

Viral symbiosis is the most common type of symbiosis, however the mechanisms by which viruses, bacteria, and animals form stable and functional units are still poorly understood.

Early in his career, in 2002, Rohwer performed the first shotgun metagenome, a method of randomly sequencing DNA from the environment which transformed the study of viruses and microbes in the environment. Building on this early work, his lab has shown that viruses are important mediators of symbiosis in organisms as diverse as corals and humans.

“We’ve found that viruses are essential for a novel immune system that protects animals from bacteria,” Rohwer said. “And we have come to realize that viruses are some of the most successful life forms on the planet and it is essential to consider their influences to understand life.”

While working on individual explorations, the cohort group will also be able to develop and strengthen collaborations with each other.

“I am looking forward to the spark when we bring these researchers together. While the foundation’s role is to provide resources to under-funded but important areas of science, it will be up to this group of investigators to spin up new ideas and help each other make those ideas even sharper,” said Jon Kaye, director of SASI.

This is Rohwer’s second investigator award from the foundation, which supports path-breaking scientific discovery, environmental conservation and health care improvements. He previously received an award through Moore’s Marine Microbiology Initiative to pursue research on how trillions of microbes at the base of the ocean’s food web interact with each other and environment, and affect the movement of nutrients in our oceans.