In hundreds of carefully organized filing cabinets and metal racks on the second floor of the South Life Sciences building, the extensive history and staggering variety of the natural world springs to life in San Diego State University’s Biodiversity Museum.

What is the SDSU Biodiversity Museum?

The SDSU Biodiversity Museum also includes the SDSU Herbarium and the SDSU Greenhouse, managed by biology professor Lluvia Flores-Rentería and Bob Mangan, respectively. The herbarium houses an additional 25,000+ plant and algae specimens and the greenhouse contains over 1,000 specimens of live plants.

Why are these specimens useful?

MS: Plant and animal collections are no longer static things only filed away in cabinets. Increasingly, the collection information of biological specimens are databased. This means that all of the information recorded at the time of collection — species name, locality (including latitude/longitude), habitat, and associated species — are electronically available to the public or for scientists to do research studies.

Such data is particularly important for rare and endangered species, to evaluate past and current distributions and population size. In addition, changes in the timing of reproduction can be assessed from the records of biological collections. This can entail studying the changes in flowering time or insect activity over the decades, to determine, for example, if the flowering and fruiting times of plants or the emergence and activity of insects and relatives are changing with increasing temperature due to climate change.

If the identity of a particular species were ever in question, experts could verify it by visiting the collected specimen. Or, if there were ever any changes in the naming and classification of a species due to new analysis, these specimens could be updated accordingly.

How has the SDSU Biodiversity Museum helped advance science?

MS: The collections have facilitated the identification of quite a few species novel to Western science like a new ancient arachnid and a vivid yellow tanager in Peru. In any scientific publication documenting a new species, a specimen is required to be deposited at a scientific institute, like our museum.

One example of the importance of biological collections in our SDSU Biodiversity Museum is the plant species Cryptantha wigginsii. This plant, collected only one time and in a single locality in 1931 was presumed extinct, as it had not been seen since that initial collection.

However, in May 2010 Patrick McConnell, a former student at SDSU, collected a plant in Carlsbad, which he brought to the SDSU Herbarium. After perusing the literature, I discovered that McConnell’s specimen was indeed the missing species, one not found in nearly 80 years. Other specimens of it were subsequently discovered, some of which had been sitting unknown in herbaria around the state. Cryptantha wigginsii is now listed as rare in California.

Additionally, SDSU graduate students and faculty members Annalisa Berta, Eric Ekdale, Ted Cranford, and the San Diego Natural History Museum’s Tom Deméré recently dissected the head of a gray whale (Eschrictius robustus). They published some of the first and most comprehensive studies of the anatomy of this gray whale in a handful of articles in 2015. The skull, dentaries and right baleen rack from this dissection are now part of the Mammal Collections at the SDSU Biodiversity Museum.

What are some of the most special specimens in the collection?

MS: Seventy-three of the plant specimens were collected on or before 1897, the year that San Diego State University was founded as the San Diego Normal School. The oldest specimen is a fern, Botrychium dissectum, collected in 1874 in Canada.

Of local interest are nine specimens collected by a Laura F. Kimball, who was a fern collector and daughter of one of the first settler families in National City.

One specimen in particular, Kimball #224, was collected on June 7th, 1897, the year of the founding of what is now San Diego State University. Laura Kimball collected this plant at Stonewall Mine, in the Cuyamaca Mountains of San Diego County. This specimen is an aquatic fern named Marsilea vestita (water-clover). The paper to which the plant is attached has yellowed over the years, but the plant itself, measuring 8 inches across, is in very good shape, with numerous 4-leaf clover-like leaves and still bearing the round “sporocarp” reproductive structures at the base, characteristic of this plant. 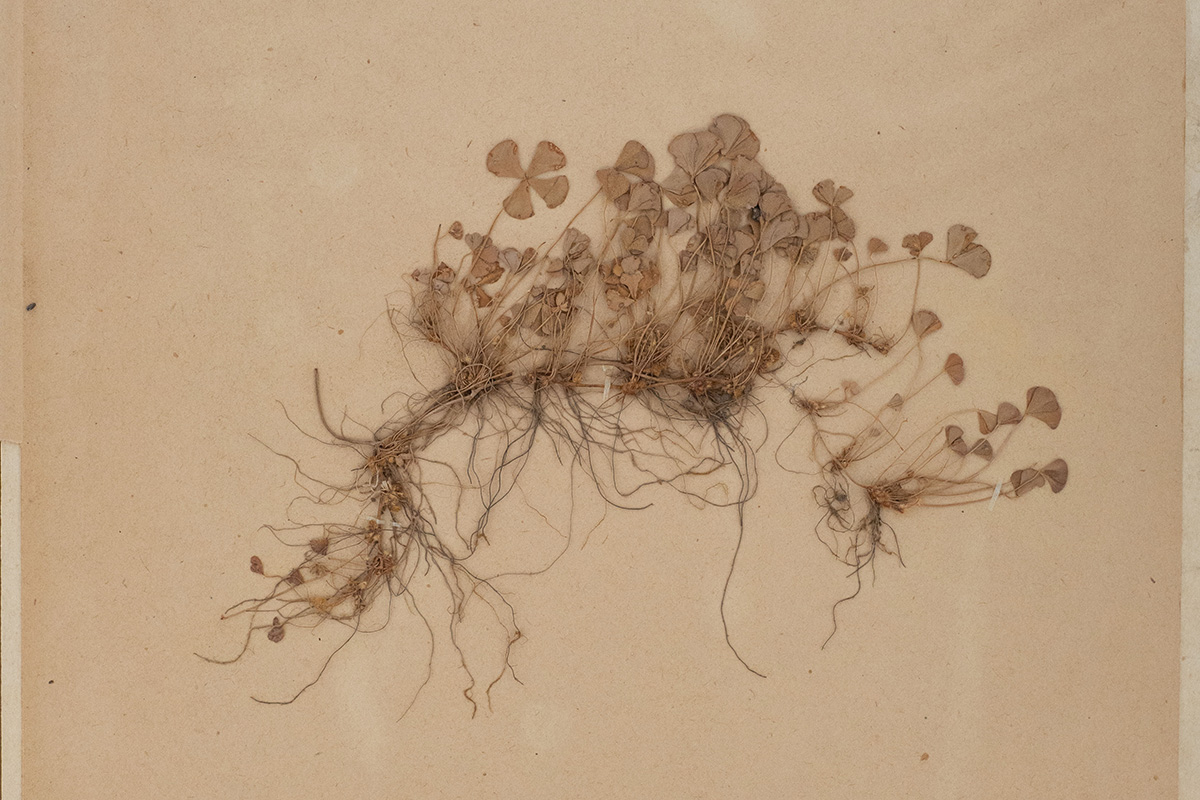 These plant specimens are pressed and dried when collected, then mounted, today onto a sheet of acid-free paper with a label and barcode affixed. Plant specimens, if properly dried and kept free of humidity and insects, can last for hundreds of years. They can retain much of their form, as the cellulose of plant cell walls is a pretty resilient material. In fact, tissues of the plant, including pollen grains, can be removed from the specimen and studied, e.g., utilizing an electron microscope.

How can people engage with the SDSU Biodiversity Museum?

MS: We periodically open the doors of the collections of the SDSU Biodiversity Museum to the public. Our next planned event is Friday Feb 10, 2023 in celebration of Darwin Day which celebrates the birth of Charles Darwin, the forefather of evolutionary biology. We welcome the community to observe displays of many examples of our diverse collections of animals and plants on that day. Come see how we preserve and document the tremendous diversity of life!