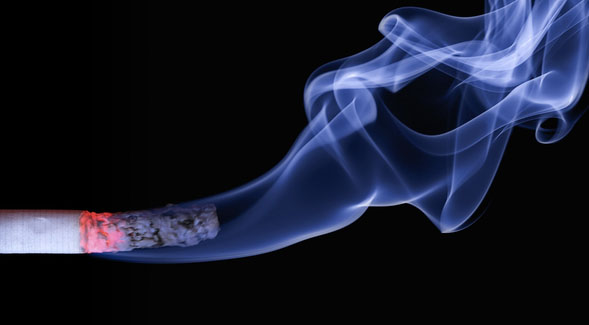 According to an interdisciplinary team of SDSU researchers, existing smoking regulations do not prevent unintended exposure to residual tobacco smoke.

The scent of stale tobacco may be found in thrift stores, decade-old books, rental cars and hotels. Now, a growing body of research indicates the negative effects of this thirdhand smoke is likely far more extensive than currently understood.

In fact, the research indicates that thirdhand smoke may be absorbed through the skin, ingested through house dust, and inhaled well after a smoker has finished a cigarette. A new San Diego State University study focused on a simple method to detect the lingering presence of thirdhand smoke in fabrics is contributing to that body of work.

Georg E. Matt, who chairs SDSU’s Department of Psychology, led an interdisciplinary team in a study of pillows, which he calls “sponges for environmental toxicants.”

The team wanted to understand whether brand new fabrics could capture residual nicotine—a marker for thirdhand smoke—after being placed in in the homes of former smokers where no current smoking was taking place. For the study, the team placed new, travel-size organic cotton pillows in the homes of non-smokers and also people who had smoked in the past (an average of 67 cigarettes per week), but had quit smoking before the study started.

After collecting air samples and also analyzing all pillows for nicotine concentrations using isotope-dilution liquid chromatography MS/MS, the team found evidence of residual nicotine after three weeks exposure in the homes of the former smokers. The presence of nicotine in the homes of non-smokers was similar to that of the laboratory blanks—in other words, virtually non-existent.

The team’s findings are detailed in an article, “Cotton pillows: A novel field method for assessment of thirdhand smoke pollution,” published in the peer-reviewed journal, Environmental Research. Matt’s co-authors are: Eunha Hoh, Penelope Quintana and Jayson Arceo, researchers in SDSU’s School of Public Health; and Joy Zakarian, a research associate at the SDSU Research Foundation.

While the researchers are well acquainted with the ubiquitous nature of the potentially hazardous residue, the team was surprised with how nicotine pervades deep into the pillow—not merely in the pillow cases, but into the interior fabrics and filling.

“We knew that active smoking causes smoke residue to adsorb into tables, walls, doors and other materials. We were surprised, however, by how easily thirdhand finds its way into and pollutes new and clean materials brought into a home,” Matt said. “We were also surprised by the sheer mass of nicotine that becomes embedded in a small travel-size pillowcases, fabrics and filling.”

Hoh, a SDSU public health professor and head of the Division of Environmental Health, said the team’s findings indicate that pillows can be an important medium through which non-smokers, including children, are exposed to tobacco smoke.

“Humans contact cushions all the time without much consideration of them containing toxic materials,” Hoh said.

Nicotine residue may also be found in carpets, upholstery, blankets, clothes, drapes, toys and other materials left indoors. What is not as clear, Matt said, is how to remove nicotine after it has become embedded in walls, cabinets, ceiling and materials. Nicotine is a marker for other toxic components of thirdhand smoke, but is also a concern in itself as nicotine can be changed into the highly toxic and carcinogenic tobacco-specific nitrosamine NNK, as shown by researchers at Lawrence Berkeley National Laboratory.

The findings also lend additional concern that both children and adults are likely experiencing unintentional and unwanted exposure to thirdhand smoke even when they do not live with or have close interactions with smokers. The team’s research supports the existing policy debate that smoking should be prohibited in all indoor environments.

“With strong anti-tobacco smoke strategies in public health, the smoking rate in the population has decreased. This is one of the very successful public health accomplishments,” Hoh said. “However, the current smoking regulations do not protect against unintended exposure to tobacco smoke residue, which is composed of toxic chemicals in indoor environmental settings.”

Matt, who has been studying these issues for decades, says the team’s work will continue and expand. The team recently received funding from the California Tobacco Related Disease Research Program for two new studies. One will examine methods to remove thirdhand smoke from homes (led by Penelope Quintana and Eunha Hoh, as part of the California Thirdhand Smoke Research Consortium). The second, led by Matt, is a new study to investigate secondhand smoke exposure in multi-unit housing from drifting marijuana, electronic cigarettes, and regular tobacco cigarette smoke.

The team is currently recruiting study participants in the San Diego region and would like to connect with nonsmokers living in multi-unit housing who are affected by marijuana, e-cigarette, or tobacco smoke from neighbors. Those who are interested should reach out to Matt directly via SDSUTEMProject@sdsu.edu.