‘Ninja’ Kangaroo Rats Kick Rattlesnakes In The Head Faster Than You Can Blink!

Kangaroo rats are abundant and seemingly defenseless seed-eating rodents that have to contend with a host of nasty predators, including rattlesnakes — venomous pit vipers well known for their deadly, lightning-quick strikes.

Timothy Higham, an associate professor in the Department of Evolution, Ecology and Organismal Biology at UCR, is a coauthor on two papers published today in Functional Ecology and the Biological Journal of the Linnean Society that present detailed analyses of the behaviors and biomechanics of both kangaroo rats and rattlesnakes.

“Both rattlesnakes and kangaroo rats are extreme athletes, with their maximum performance occurring during these interactions,” Higham said. “This makes the system excellent for teasing apart the factors that might tip the scale in this arms race.”

The research team documented the interactions between kangaroo rats and rattlesnakes in the wild by using radio telemetry to patiently track the hunting behavior of free-ranging rattlesnakes, and then placing high-speed cameras to record snakes hunting in locations frequented by kangaroo rats. The resultant videos provide the first ever detailed look at the maneuvers that kangaroo rats use to defend themselves against a deadly predator.

“These lightning-fast and powerful maneuvers, especially when executed in nature, tell us about the effective strategies for escaping high-performing predators,” Higham said. “Those that are successful at evading the strike will suggest ways in which the kangaroo rat might be evolving in response to the intricacies of the predatory movements.”

“Kangaroo rats that responded quickly were frequently able to jump clear of the snake completely, leaving the serpent biting nothing but dust as the kangaroo rat rocketed 7-8 body lengths into the air,” said Rulon Clark, an associate professor of biology at San Diego State University and a coauthor on both research papers. “But in perhaps the most surprising finding of our research, kangaroo rats that did not react quickly enough to avoid the strike had another trick up their sleeves: they often were able to avoid being envenomated by reorienting themselves in mid-air and using their massive haunches and feet to kick the snakes away, ninja-style.”

One video shot by the students on the research team shows a kangaroo rat successfully kicking a snake. The snake is sent flying through the air and crashing to the ground several feet away while the kangaroo rat bounds off. Such defensive kicks solved a mystery that had puzzled the team for years: the group’s previous research showed that kangaroo rats often emerged from seemingly successful snake bites unscathed, but it was not clear how. The researchers even tested the blood of kangaroo rats to be sure that they weren’t physiologically resistant to snake venom, the way some squirrel and opossum species are.

“Our previous work used lower-speed cameras, and although it seemed as though snakes had successfully struck their prey, the movements of the animals at the moment of impact was too blurry to see details,” said Malachi Whitford, a doctoral student at San Diego State University and the lead author on one of the papers. “In this new work, we used cameras with much higher recording speed and resolution, which helped show in exquisite detail that kangaroo rats not only have record-breaking reaction time, but can also use their long tails to reorient their bodies while jumping, thereby optimally positioning themselves for both defensive kicking and landing on their feet.”

Rattlesnakes are classic ambush predators. They hunt by hiding and remaining nearly motionless for prolonged periods. They strike at prey that gets too close. The prey avoids being struck by initiating a successful evasive maneuver. In the wild, both predator and prey can alter the outcome at multiple stages of an interaction in ways not readily apparent in the lab.

“Our work, which, to our knowledge, is the first to describe the kinematics of evasive leaps by bipedal rodents avoiding actual attacks from predators, supports the idea that bipedalism may have been favored in kangaroo rats because it allows for the rapid and powerful leaps needed to avoid ambush predators such as vipers and owls,” said Grace Freymiller of San Diego State University, the student lead author of the second paper.

The research received funding from San Diego State University, the Animal Behavior Society, and the American Society of Mammalogists. 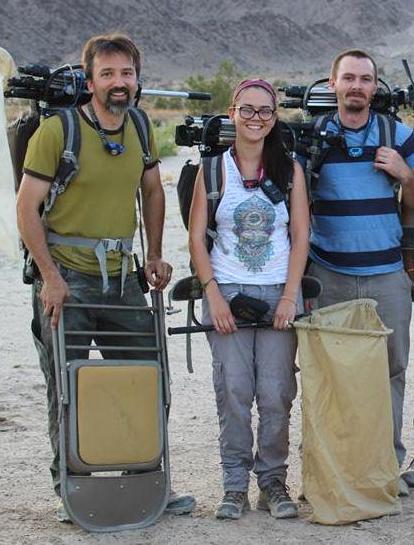 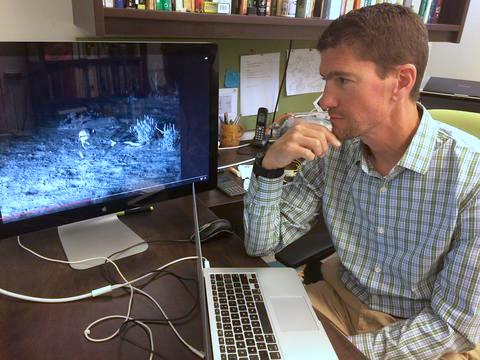 Timothy Higham is an associate professor at UC Riverside. (I. Pittalwala/UC Riverside)

“Our work, which, to our knowledge, is the first to describe the kinematics of evasive leaps by bipedal rodents avoiding actual attacks from predators, supports the idea that bipedalism may have been favored in kangaroo rats because it allows for the rapid and powerful leaps needed to avoid ambush predators such as vipers and owls.”