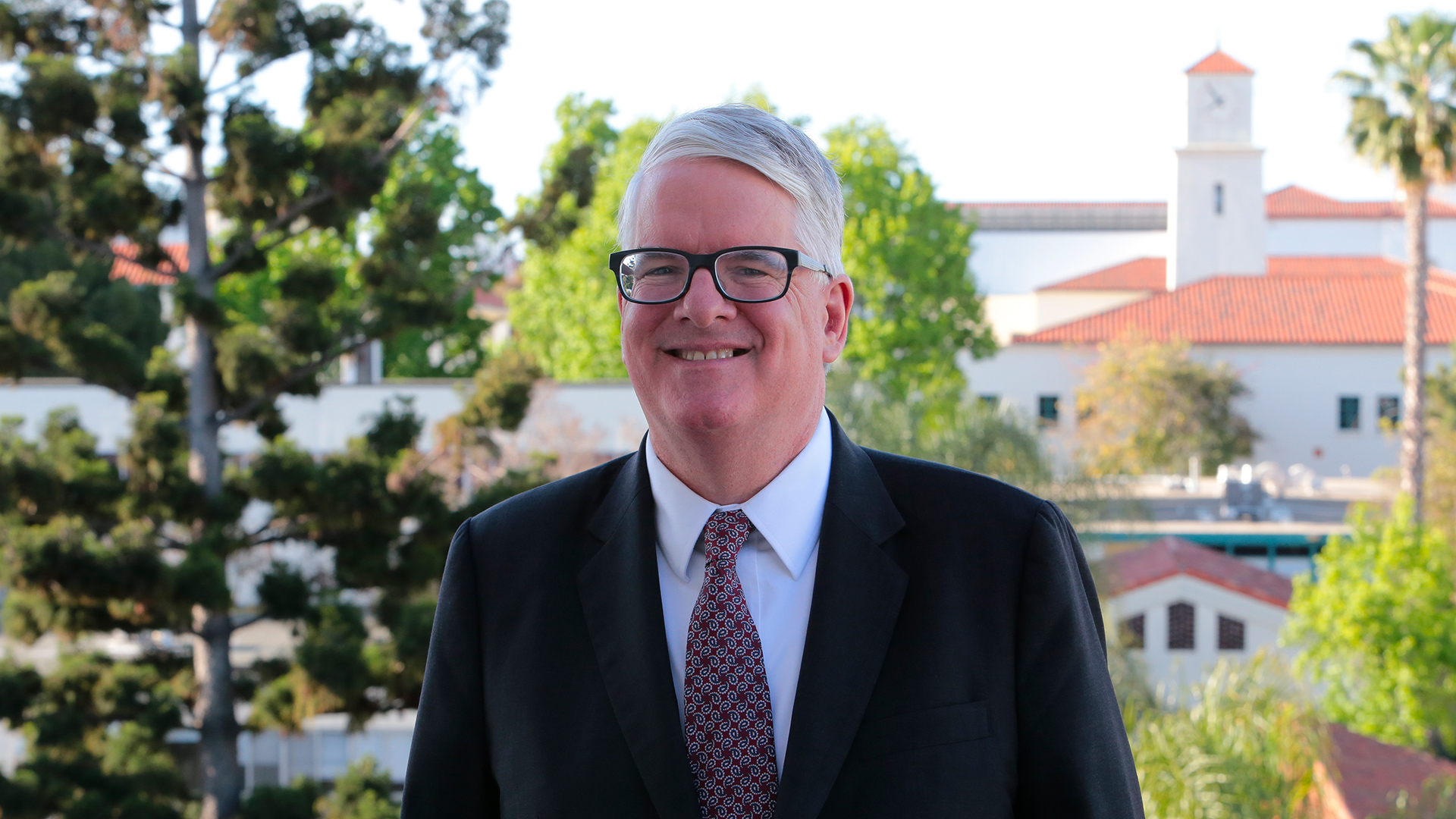 The dean of the College of Sciences gained early exposure to research opportunities and wants to ensure SDSU students do too.

Jeff Roberts was a newly minted graduate from the University of California, Berkeley, when he and his parents attended a banquet in 1982 to honor students receiving a prestigious scholarship to pursue doctoral studies. It all seemed surreal.

The Roberts family hailed from small town Santa Rosa in the wine country north of San Francisco, and had never been to a banquet. Seated at their table were a Nobel prize-winning chemist and a host of other highly accomplished scientists.

The distinguished company helped his parents understand why their son wanted to move 3,000 miles to pursue a Ph.D in chemistry at Harvard University. Roberts was on the fast track, going from community college to Berkeley to Harvard, all in the space of two-and-a-half years.

“From their perspective, the purpose of education was to prepare me to be economically self-sufficient,” Roberts recalled. “The notion of studying for a Ph.D was hard for them to accept initially.”

Today, as San Diego State University College of Sciences dean, Roberts continues to channel an abiding belief in the power of scholarship and strives to provide faculty and students with ample opportunities and resources to pursue research.

It was a gratifying experience for Roberts, whose love of chemistry began while watching his father compounding medicines in the family pharmacy. He also learned early on to cook since his mother worked the second shift from 3 p.m. to 11 p.m as a nurse, which usually meant casseroles for dinner until Roberts began experimenting in the kitchen.

Due to financial reasons, he attended Santa Rosa Community College before gaining admission to Berkeley, where he realized he actually had an advantage over the four-year students because he had had plenty of lab exposure and hands-on experience before transferring.

In his first week there, his advisor recommended he consider graduate school and connected him with a professor who offered him a lab research opportunity.

“It was a pivotal moment in my life that put me on the path to grad school and a Ph.D,” Roberts said.

At Harvard, Roberts worked with professor Cynthia Friend in surface chemistry, exploring how a molybdenum surface — a silvery white metal that resists corrosion — reacted with sulfur containing molecules. His research focused on removing sulfur from petroleum gas using molybdenum as a catalyst, to prevent sulphur oxide from being released when gas is burned.

“Why does iron rust? Why is Scotch Tape sticky? All of that is explained in surface chemistry,” Roberts said. “The world around us is filled with intersections where the solid table meets the air which meets the water in the ocean outside. So you need to think about how these media interact.”

He returned to California as a post-doctoral researcher at Stanford, to work with Robert Madix, a brilliant scientist in surface chemistry who was actually with the engineering school. This is where Roberts first gained an appreciation for interdisciplinary collaboration, a culture that also thrives at SDSU.

Roberts then headed to the University of Minnesota, Minneapolis where he ran an active research lab and taught for 19 years, eventually becoming department chair of chemistry. His career then took him to Purdue University where he later became the dean of the college of science.

Nearly three decades of very cold, long winters persuaded him to return to his home state in 2019 and join SDSU.

Science faculty at SDSU have found Roberts to be thoughtful and considerate, willing to listen, a generous mentor, and open about the unknowns.

When a former student of hers passed away, assistant chemistry professor Christal Sohl was touched when Roberts came to her office to check in on her. He also took the time to celebrate the graduation of a group of MARC (Maximizing Access to Research Careers) student researchers, and took part in a focus group for budding student entrepreneurs to vet their ideas.

“His willingness to show his humanity is a critical piece of his effective leadership,” Sohl said. “He supports those who are trying to make positive changes on campus, which is inspiring.”

When the pandemic began and SDSU transitioned to virtual classes, Roberts was sensitive to the challenges many early-career faculty face, both in advancing their research and in juggling responsibilities as a parent. He learned about the often unequal burden carried by women and minorities in juggling their many roles, and offered his support.

Psychology professor Vanessa Malcarne recalled how Roberts broke his foot soon after arriving at SDSU, while living in a second-floor apartment and waiting for his family to join him, but handled his challenges with a sense of humor. She appreciated that he never tries to rush solutions but takes the time to sift through issues.

“I’ve been very impressed with his transparency and honesty,” Malcarne said. “He believes that students learn best by being directly involved in the creation and dissemination of knowledge and working side-by-side with faculty. This is a central and deeply held value for Jeff, and it informs everything he does.”

The crux of a favorite speech that he often shares with students and parents crystallizes what drew him to SDSU and its growing research enterprise. He would show them a textbook he used in community college, and a recent textbook now in use, to demonstrate how things change at a research university.

“Knowledge changes incredibly, most of it is created at universities and we teach your kids as soon as we create it, so why would you not want them to learn from researchers creating that knowledge,” he would tell parents.

As dean, his priority is to ensure the high-caliber faculty recruited by the college have the resources to take their research to the next level. The college currently has 180 faculty members.

Adequate space is a bottleneck, but this is where the future Mission Valley campus will make a big difference. “We want to make sure we don’t just attract assistant professors but also retain these highly accomplished scholars who will want to stay and grow their research labs, which is why Mission Valley is so important for us.”

For the next couple years, shepherding the college through the challenges brought on by the pandemic will be his focus. “Protecting our research mission is my top priority. We won’t do much hiring, so my job is to focus like a laser beam on ensuring our faculty can do the research they need to do and successfully serve our students.”