Head Start to Microbiology Research as a Rising Sophomore 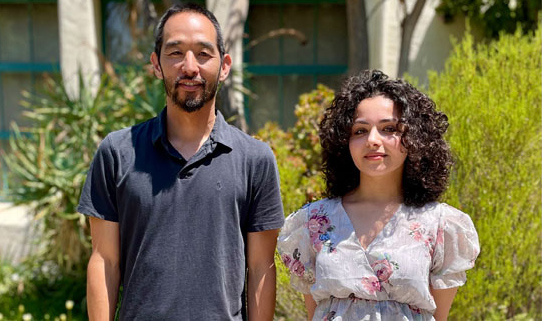 Sama Rakin Michael began as a teaching assistant and is now working on genetically modifying bacteria in the lab.

By Delaney Weidner and Padma Nagappan

She learned about the opportunity to be a teaching assistant for marine microbiologist Nick Shikuma in a spring semester discovery-based course during her freshman year. In the lab, Michael learned how to conduct research, from collecting samples to assembling an entire genome sequence, analyzing the genomic content and writing manuscripts.

Shikuma’s lab focuses on how bacteria induce the metamorphosis of tubeworms, and how this can inform research to develop therapeutic drugs. He has a five-year grant from the National Science Foundation of nearly $1 million, intended in part to help him develop a pipeline of underrepresented minority researchers like Michael.

Michael has been working with Shikuma on genetically modifying environmental bacteria with plasmids — genetic material in a cell that can provide new genes and abilities. Michael hopes to study the bacterium’s genes that allow it to grow and reproduce in the open ocean.

Michael and her family moved to the U.S. from Mosul, Iraq when she was in fifth grade. With a pediatrician mother and surgeon father, she knew early on that she wanted to follow in her parents’ footsteps and pursue biology.

After being accepted into the dual enrollment program at Grossmont Middle College High School — located on the Grossmont College campus and geared to upperclassmen who can earn college credits while completing high school — Michael started at SDSU last year with 47 units, having already knocked out most of her GE requirements. She became a teaching assistant shortly after.

By then, she had found her strength in biology and enjoyed science, leading her to where she is today.

Shikuma said, “By exposing Sama and students like her to research early in their education, we hope to get them ‘hooked’ on STEM careers. These students will be the most successful stewards of science in our future.”

The SDSU News team spoke with Michael about her impressive track record and research.

What research are you working on?

My lab partner Alpher Aspiras and I are helping Ph.D. student Amanda Alker with her current project. We are isolating new bacteria from seaweed or tubeworm surfaces at Sunset Cliffs to see if they can accept plasmid DNA. We can track which plasmids work because one plasmid has a green fluorescent protein, the other has a red fluorescent protein. We will know if the bacteria accepted those plasmids by looking at them under the microscope and observing the green or red fluorescence. Knowing which bacterium accepts the plasmids means that we will be able to study the bacterium’s DNA in detail.

When will you find out?

We are still growing the bacteria onto agar plates that we coated with specific antibiotics designed for the plasmid. We will know that a specific bacterium has the plasmid if they are resistant to the antibiotic. We will then take those bacteria that survived and grow them on other agar plates. We can then put them under the microscope to see if they’re fluorescent or not.

What about that process fascinates you?

What’s fascinating is that I know and understand everything that’s happening in the lab. It’s fun for me because I get to be in the lab as a sophomore. Other than seeing bacteria express green and red fluorescence under the microscope and taking awesome microscopic pictures of them, I am fascinated by the general process of genetic manipulation and the many different pathways that we can take to further understand these strains of bacteria.

How can you incorporate this research into the real world?

That’s what I’m trying to find out. The first step is to manipulate the bacteria. Then we’ll study the DNA and proteins from the new bacteria and how the specific characteristics can be used for medical purposes. Dr. Shikuma’s lab focuses on infections and microbes, so hopefully our research will help him with that. Once we know if the bacteria will accept the plasmids, we will be able to further manipulate the bacteria by adding different genes in the plasmids. The fluorescence is just the first step to allow us to track it under the microscope.

What does it mean for you to be getting this kind of mentoring in the lab?

I am so grateful to have the guidance of the Ph.D. students, the postdoctoral researcher, and Dr. Shikuma in the lab. I consider myself to be very lucky to have this great opportunity and leadership as a freshman going into research. I’m very excited to see how far we can work on this project.