From India to SDSU: A New Shark Genome 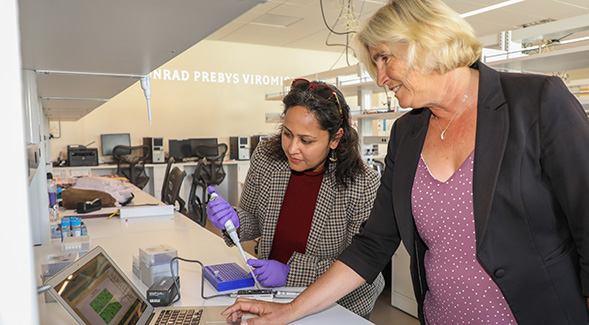 The work in an EIS lab could help protect a species whose numbers are dwindling.

Using a tiny tissue sample collected from one of the largest fishing ports in India, a San Diego State University laboratory has developed a detailed genetic profile of a vulnerable shark species—a step that could prove useful in future conservation efforts.

Conservation geneticist Shaili Johri sequenced the genome of the silky shark, known for the distinctive texture of its skin and a particularly acute sense of hearing. It’s only the sixth new genome out of 1,200 species of sharks, providing data needed for biological conservation and management that was previously unavailable.

“Getting a genome tells you how the animal works,” said marine microbial ecologist Elizabeth Dinsdale, head of a lab in the Engineering and Interdisciplinary Sciences building where the work was completed.

Johri used a DNA sequencing instrument the size of a flip phone. Invented primarily as a medical diagnostic tool, the $1,000 device connects with a laptop computer to perform a genome “skimming,” a less complete version of the kind of work that would typically cost nearly $3 billion during the days of the Human Genome Project.

Today, genome sequencing is a speedier process. Because of this, researchers were able sequence the DNA of the shark in about three days and to annotate—the process of identifying the locations of the genes and what they do—in about a year.

Johri, an adjunct faculty member and post-doctoral student in Dinsdale’s lab with a personal interest in wildlife conservation, traveled to 8,700 miles to Veraval, India, to collect DNA samples and assess shark biodiversity. The sharks are mostly bycatch, collected while fishing for tuna and mackerel.

Johri worked with collaborators from the regional College of Fisheries to act as liaisons with local fishers and sellers, obtain samples of muscle tissue as small as 3 millimeters from shark fins coming into the port and sold at fish and export markets.

The shark was sequenced on a hand-held device, the MinION, manufactured by U.K.-based Oxford Nanopore Technologies. The technology allows the sequencing to be performed in the field through a connection to a portable computer; it has been used in remote field labs to sequence DNA from an Ebola virus outbreak.

The source of the fins wasn’t known at first; identifying a specific shark typically requires an entire body, Johri said. The sequencing, however, allowed her to identify one of the specimens as the silky shark (Carcharhinus falciformis) which swims in tropical waters and lives off tuna, octopus, and squid.

“What we show in this method is that it was able to sequence very different kinds of DNA within the silky shark genome,” Johri said, “so that increases the likelihood that it would be able to sequence other species equally well.”

The silky shark is not endangered, but is considered vulnerable due to the continued market for its oil and fins and a slow reproductive rate. And many similar species do face extinction. The ability to identify a shark species from genes in a small sample could help detect illegal trade and promote conservation management.

“Sharks are an important organism,” Dinsdale said. “Removing sharks has significant effects on all the other components of the environment.”

Identifying the genome provides information to learn more about the sharks’ numbers, where they live and their evolutionary development, filling an ecological “data deficiency” that applies to about half of all shark species. The new data then could be used to designate protected areas and take other steps to manage fishing.

While this research used actual tissue samples, Johri said the lab is testing the feasibility of gathering DNA just from ocean water, capturing it from shed cells or fecal matter of organisms that have passed by.

The product of the research is not yet a complete genome, Dinsdale said, “but it’s a quite good partial genome” and it corrects a previous effort that was found to be riddled with mistakes.

Beyond the use of the genetic knowledge in shark conservation, Dinsdale noted there are bigger science questions the study could help answer. Sharks show an apparently high genome stability that is a factor in their long life spans, great wound-healing powers and a near-immunity to cancer.

A paper on the work was published in Nature Scientific Reports. Funding for the research came from a private donor and the international Society for Conservation Biology-Marine Section.