To study which senses a rattlesnake uses to move in darkness, an SDSU doctoral student developed a bold but simple test.

San Diego State University doctoral student Hannes Schraft wanted to learn whether rattlesnakes find their way around at night with their eyes alone, or get an assist from the same thermal-sensing abilities they use to hunt prey.

How would one do this? Blindfold the rattlesnakes, of course. The results were unexpected.

Schraft had never actually seen a rattler before beginning his Ph.D. work with SDSU biologist Rulon Clark. Growing up north of Zurich, Switzerland, Schraft kept docile corn snakes as pets. Then, as an undergraduate at the University of Puerto Rico, he developed an interest in the evolutionary basis for animal behavior.

It has long been known rattlesnakes can “see” the infrared (IR) portion of the electromagnetic spectrum. They have a specialized pit on their faces with a heat-sensitive membrane, allowing them to perceive thermal radiation. Their visual acuity also is quite high, believed to be on par with cats at night.

In previous research, Schraft considered whether rattlesnakes use their IR abilities to zero in on cooler prey, which might be slower and easier to catch. For the new study, he wanted to determine whether rattlesnakes tap into this additional sensory channel for navigation at night, when visible light is low but IR contrast is very high.

To answer this, Schraft had to come up with a way of blocking both the snakes’ vision and their IR abilities, both individually in some snakes and together in others, then observe the results and compare them to snakes without any impairments—a classic example of the scientific method.

Snakes on a plain

Schraft and three assistants, Elizabeth Signore, Tom Gantner and Chanont Alvord, set up a field station at a flat, sandy site at the Barry M. Goldwater Air Force Range in the desert outside Yuma, Arizona.

Working with permission from Marine Corps Air Station Yuma, which maintains the range, the team worked for seven weeks over the summer, five nights a week, from about 8 p.m. to 1:30 a.m., when the sidewinder snakes sought for the study are more active.  “Because it’s so sandy, their tracks are pretty distinctive,” Schraft said. “You can follow the tracks until you find the snakes.”

To wrangle the snakes, the team used tongs.  “You pick them up with the tongs, and then you drop them into a cloth bag and put a knot in there. You can do this perfectly safely.”

Back at the field station, the team administered an anesthesia.  The fumes take effect in 10 to 20 minutes, the snake goes limp, and the team can begin to block its senses.

To blindfold the snakes, the researchers used a very small strip of black duct tape. To block the pit organ, they used a sphere of beeswax placed in the pit with tweezers and held in place with a drop of medical glue. For the experiment, some snakes got only one treatment or the other, some got both and a control group got neither.

The snakes wake up  quickly, but the team delayed release for a day to allow them time to adjust to sensory deprivation.

The group then returned to the collection point and deposited the rattlesnakes in a 10 meter-wide arena set off by wooden stakes and black tarp and including four bladder sage bushes. The test would be to see whether the snakes moved toward the normally preferable, warmer bushes depending on which of their senses had been dulled. After hiding behind a sand dune for 10 minutes, the team returned to check the snakes’ tracks and see where they went.

“I was expecting to see that when they were blindfolded, but had their infrared organs that they would still be just fine,” Schraft said. “Because they could ‘see’ those warm bushes with infrared. When snakes hunt, that’s what they can do.”

But this was not what happened. Snakes without blindfolds found the bushes just fine, and blocking the pit organs didn’t hinder them. But “when you cover a snake’s eyes, its movements immediately become a lot more erratic,” he said. “They don’t find the bushes at all.”

No snakes were harmed in the course of the research. Schraft’s methodology was approved by SDSU’s Institutional Animal Care and Use Committee. It was funded by SDSU, the San Diego chapter of The Explorers Club, the Chircahua Desert Museum in Rodeo, New Mexico, the Society for Integrative and Comparative Biology and the Herpetologists’ League. Findings were published in the January 2019 issue of the journal Animal Behaviour. 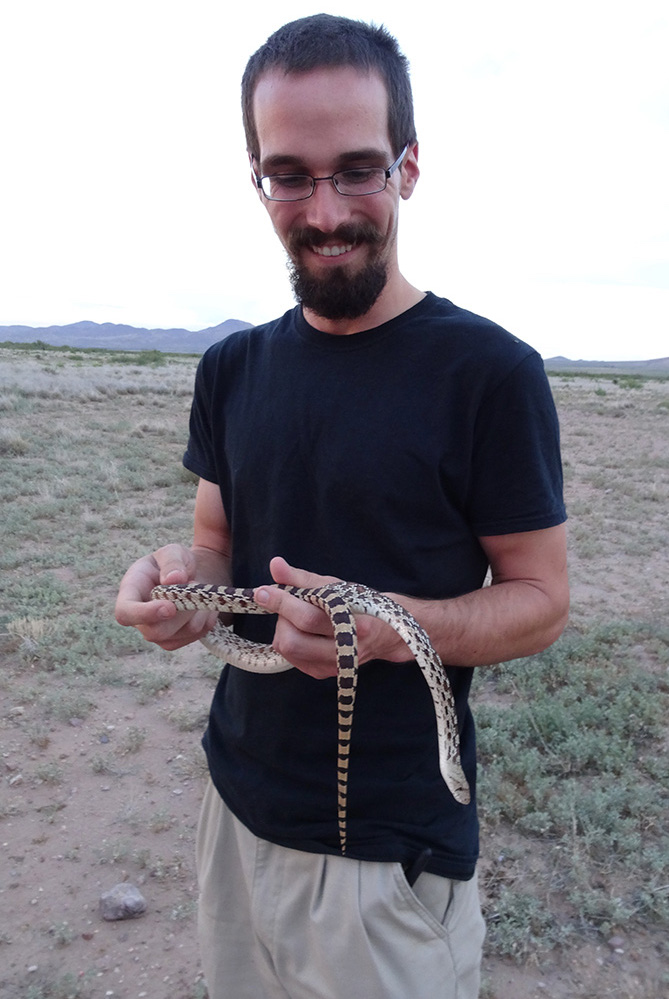 The team used snakes living in the desert outside Yuma, Arizona.