First Evidence Discovered of a Gigantic Remnant Around an Exploding Star 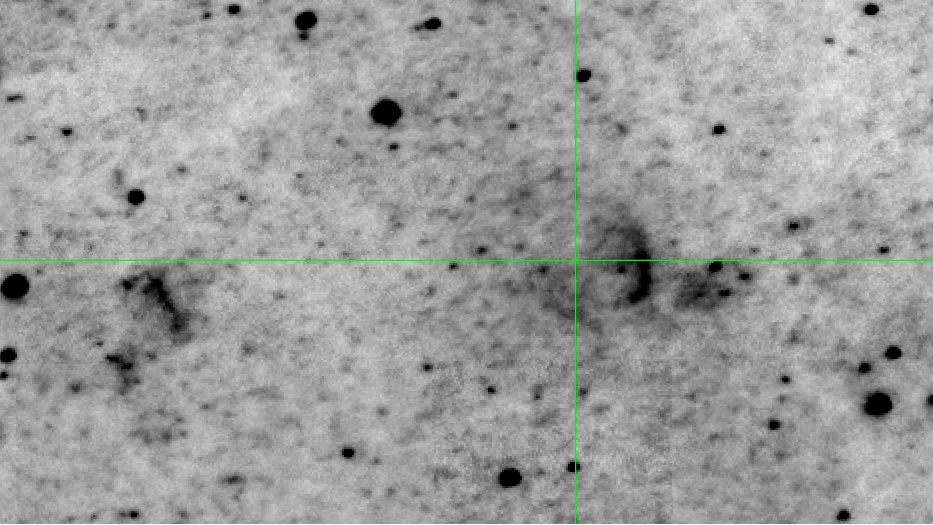 Crosshairs indicate the location of the nova studied. Remnant can be seen as a partial arc to the right of the nova.

SDSU professor helps discover precursors to the tools we use to map the universe.

A San Diego State University astrophysicist has helped discover evidence of a gigantic remnant surrounding an exploding star—a shell of material so huge, it must have been erupting on a regular basis for millions of years.

When a white dwarf, the core of a dead star, is in a close orbit with another star, it pulls gas from the other star. The gas becomes heated and compressed, eventually exploding to create a nova. This explosion causes the star to brighten by a millionfold and eject material at thousands of miles per second. The ejected material forms a remnant or shell surrounding the nova.

Allen Shafter and former SDSU postdoc. Martin Henze, along with a team of astrophysicists led by Matthew Darnley at Liverpool John Moores University in England, have been studying a nova in the nearby Andromeda galaxy known as M31N 2008-12a. What makes the nova unusual is that it erupts far more frequently than any other known nova
system.

“When we first discovered that M31N 2008-12a erupted every year, we were very surprised,” said Shafter. A more typical pattern is about every 10 years.

Shafter and his team believe M31N 2008-12a has been erupting regularly for millions of years. These frequent eruptions over time have resulted in a “super remnant” surrounding the nova measuring almost 400 light years across.

Using Hubble Space Telescope imaging along with ground-based telescopes, the team worked to determine the chemical composition of the super-remnant and confirm its association with M31N 2008-12a. These findings, published in an article in the journal Nature, open the door to the possibility that this nova and remnant are linked to something more crucial to the universe.

Type Ia supernovae are among the most powerful and luminous objects in the universe and are believed to occur when a white dwarf exceeds its maximum allowable mass. At that point, the entire white dwarf is blown apart instead of experiencing explosions on the surface as other novae do. These are relatively rare and unseen in our own galaxy since the early 1600s.

Theoretical models show that novae experiencing frequent explosions surrounded by large remnants must harbor massive white dwarfs that are nearing their limit. This means M31N 2008-12a is behaving precisely the way astronomers believe a nova does before it potentially explodes as a supernova.

The discovery of additional large remnants around other novae will help identify systems undergoing repeated eruptions and help astronomers determine how many type Ia supernovae are formed; how frequently they occur; and their potential association with novae like M31N 2008-12a. Type la supernova are a critical part of understanding how the entire universe expands and grows.

“They are, in effect, the measuring rods that allow us to map the visible universe,” said Shafter. “Despite their importance, we don’t fully understand where they come from.”

Shafter and his team are now working to understand if what they observed with M31N 2008-12a is rare, or if there is an unseen population of novae experiencing this as well.