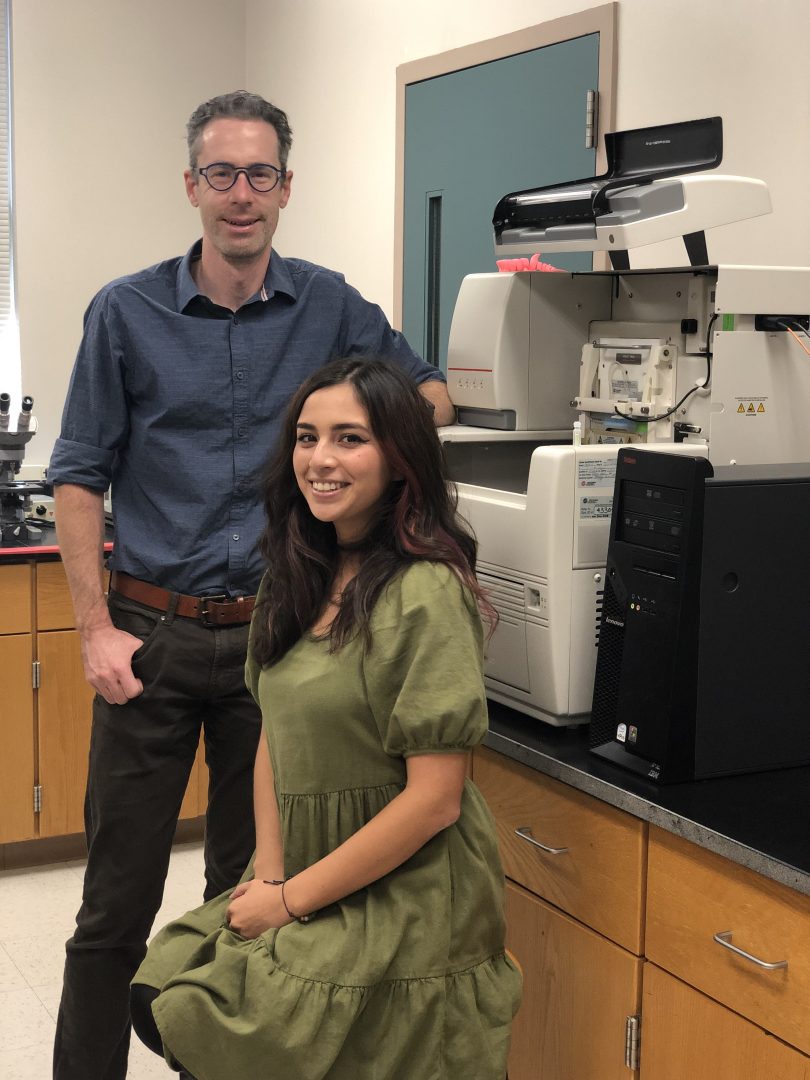 Lasers and liquids could help SDSU chemists detect amino acids in rocks from moons and other planets.

Have we been looking for extraterrestrials in all the wrong places? San Diego State University chemists are developing methods to find signs of life on other planets by looking for the building blocks of proteins in a place they’ve never been able to test before: inside rocks.

After collaborating with researchers at NASA’s Jet Propulsion Laboratory (JPL) in La Cañada Flintridge in 2019, Jessica Torres, a doctoral student studying chemistry at SDSU, is experimenting with ways to extract amino acids from porous rocks that could be used on future rovers.

Previous research has looked for evidence of other life forms in water and soil, but not from solid materials.

Current methods for identifying amino acids can’t differentiate versions created by a living organism from those formed through random chemical reactions. And existing techniques usually require water — which would freeze or evaporate if placed on a space probe traveling to Mars or Europa, the ice-covered saltwater moon of Jupiter that some regard as a prime candidate for extraterrestrial life because of its subsurface ocean.

“The true novelty of our project is to approach detection of life using alternative solvents that are better suited for space instead of water and organic solvents, which are very suitable on earth,” Torres said. “We hope to develop a microfluidic device that can extract, sample, and identify amino acids in rocks. This is particularly novel because JPL does not have a method to approach this quite yet.”

Torres is developing novel chemical solvents specifically made to operate on an automated rover visiting another planet, where water and other common solvents like alcohols and acetone would not be viable.

“It’s a cheaper way to detect life, and better in a lot of ways,” said Harrison.

Capillary electrophoresis involves separating molecules by passing them through a liquid-filled tube narrower than an average human hair. A laser attached at the end of the tube is used to illuminate a glow-in-the-dark molecule attached to an amino acid. When an amino acid passes in front of the laser, a sensor will show a spike of the laser-induced glow.

There are 20 different amino acids and each moves through the tube at varying rates based on size, electric charge, and how they react with other chemicals. Torres’s current challenge is trying to configure a unique spike for each of the contrasting amino acids; she hopes to eventually be able to identify an amino acid, even if there is only one present among a billion other molecules.

“We’re really lucky with the equipment we have here. I can do the exact kinds of things that I would do at JPL at SDSU,” said Torres. They were originally supposed to return to JPL during the summers of their Ph.D., but have worked remotely during the pandemic.

Once they have optimized the chemicals they use to reliably separate and identify each of the 20 amino acids, the team plans to test their process on sample rocks from the moon, the Mars-like Atacama Desert and Mono Lake, which is two to three times saltier than Earth’s oceans.

“What we’ll bring with this new solvent will add flexibility to analysis on Earth and beyond,” said Harrison. “Sometimes it is hard to see the impact of fundamental science until you get it in the hands of others and see which problems you’ve already solved for them.”