Common Foods Can Help ‘Landscape’ the Jungle of Our Gut Microbiome 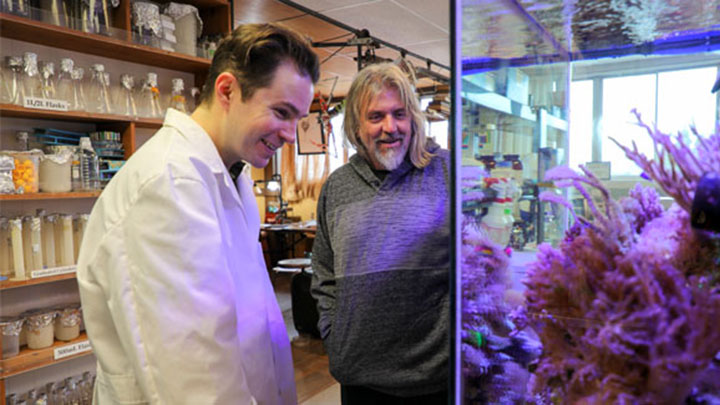 Foods such as honey, licorice, stevia and oregano have an antimicrobial effect that can help improve our health.

San Diego State University researchers have found a new way to harness food as medicine, which has far-reaching implications to control harmful microbes in our gut while balancing microbial diversity by fostering the growth of beneficial bacteria.

Foods we eat commonly affect our gut microbiota. New research shows they do so by triggering the production of bacteriophage – viruses that infect and replicate inside bacteria. Compounds in these foods have an antimicrobial effect which causes the phage to replicate.

The researchers began by identifying which foods were antimicrobial, then analyzed them before narrowing it down to a shortlist. When examining growth curves of bacteria, they observed that while bacteria multiply over time, eventually their numbers plateau. However, if phages are activated, then bacterial growth stops altogether and their numbers drop dramatically until they’re depleted.

Foods they tested that had antimicrobial effects include honey, licorice, stevia (a sugar substitute derived from the stevia plant), aspartame, hot sauce, herbs such as oregano, spices such as cinnamon and clove, rhubarbs, uva ursi (bear berry), and neem extract. They also tested toothpaste, since it’s known to contain antimicrobial compounds. Of these, honey, stevia, aspartame, neem and uva ursi had the most impact in triggering phage production.

“The microbiome is composed of hundreds of different bacteria and the phages they host,” said Lance Boling, a molecular biologist and research associate. “We could actually tackle certain conditions by adjusting the foods we consume, that will affect microbial diversity which in turn will influence health and diseases.”

“We also found some foods acted as phage inhibitors and could be used to control pathogenic viruses,” Boling added.

Our gut microbiome can affect cognitive ability, metabolism, weight gain or loss, our moods, and even cause depression. It can also cause inflammation that could lead to cancer, diabetes, Crohn’s disease and irritable bowel syndrome. With careful analysis and planning, food could be used as medicine to correct imbalances.

“This shows we could sculpt the human gut microbiome with common dietary compounds,” said Forest Rohwer, a microbial ecologist and pioneer of viromics research. “The ability to kill specific bacteria, without affecting others, makes these compounds very interesting.”

Boling works on microbiome research in Rohwer’s lab. Their findings were published in Gut Microbes.

When phage replicate they kill the host cell and exit into the environment, which can lead to a cascade effect where they infect bacterial cells around them. Each bacterial cell that bursts – when the phage grows inside them – can have hundreds of new phages that emerge. When they release in the microbiome, if there are more bacteria present, they will continue to infect the bacteria.

“There aren’t many known chemical triggers, and we wanted to find these ‘prophage’ inducers – or what causes the phage DNA to detach and replicate,” Boling said.

Once the researchers chose foods with known and perceived antimicrobial effects, they then selected bacteria representative of the two major gut phyla, Bacteroidetes and Firmicutes, including strains of pathogenic as well as beneficial bacteria. They narrowed the food compounds down to 28 from 117 candidates on which they conducted the prophage induction assay. Bacterial growth was observed with and without food compounds, for comparison. The samples were processed using flow cytometry, a sensitive method for detecting particles as tiny as viruses.

While other studies have focused on increasing the abundance of therapeutic phages, this research goes further to explore the reductive effect of 117 commonly consumed foods, chemical additives, and plant extracts on the growth and phage production capacity of common gut bacteria.

This reductive approach is “akin to pulling weeds from a garden so that more desirable plants have room to grow,” Boling said, hence the term “landscaping” the gut.

Conversely, overconsumption of broad-spectrum antimicrobial foods could contribute to low gut diversity – in other words, the same side effect that overuse of antibiotics would have on the gut.

Proper understanding and utilization of these food compounds could aid in the treatment or prevention of conditions associated with gut imbalances, and promote overall health.

“We are excited about finding more prophage inducers and determining the molecular mechanisms by which they work,” Rohwer said. “There are probably thousands of compounds that would be useful for eliminating unwanted bacteria.”

The researchers recommend foods found to be prophage inducers should be studied further to elucidate their molecular mechanisms. While the importance of phages and the fact that they are the most prolific biological entity in the biosphere is well-established, little is understood about the triggers that cause bacteria to produce phage and release them into the environment. Elucidating these mechanisms will further our understanding of how bacteria and phage shape the ecosystems that they populate.

This research was funded by the National Institutes of Health.