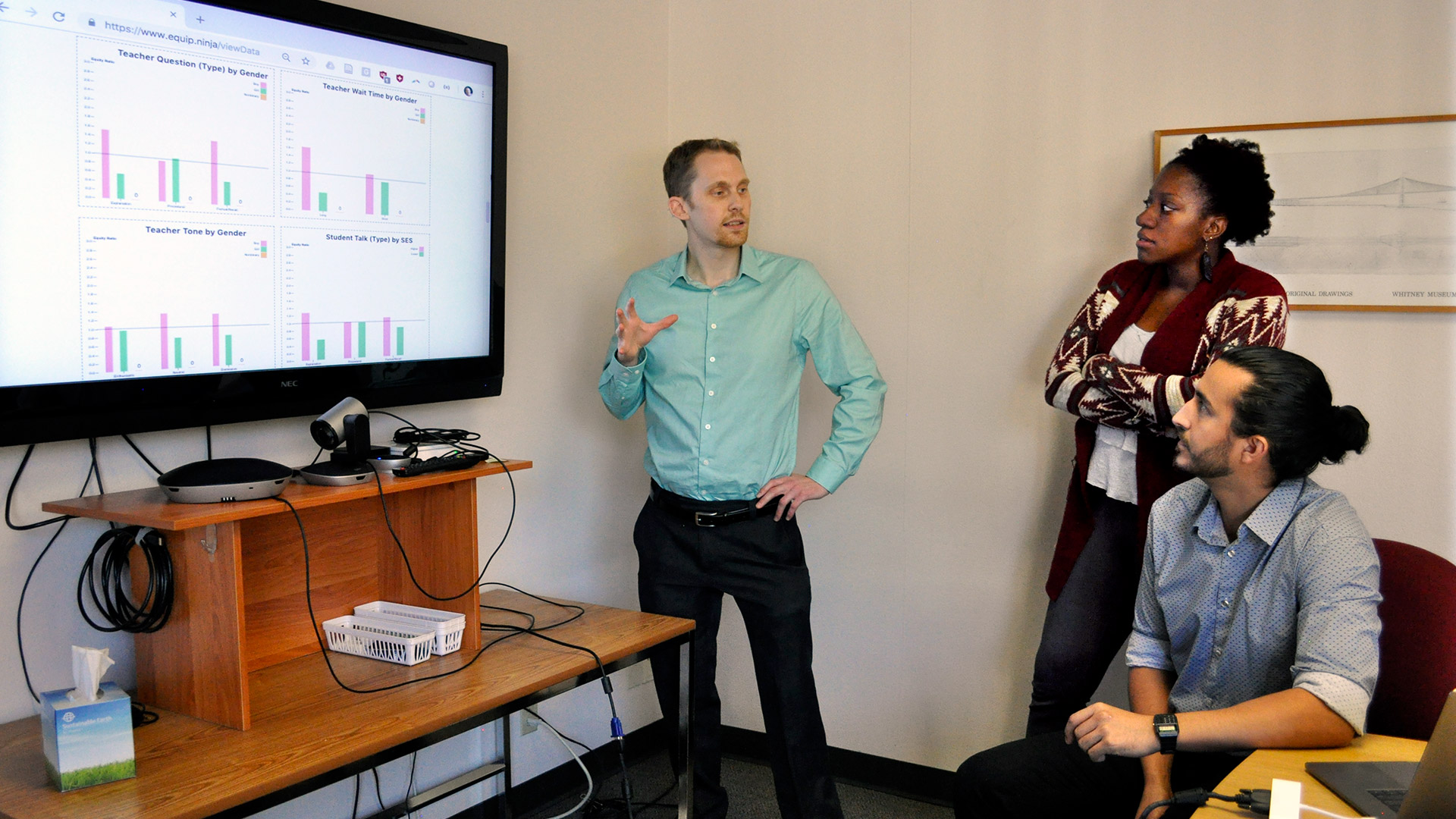 Daniel Reinholz demonstrates an app he developed to evaluate classroom equity to his students Amelia Stone and Antonio Martinez.

A nearly $1 million grant for SDSU’s Daniel Reinholz will allow further exploration of a tool to reduce longstanding forms of implicit bias.

By Padma Nagappan and Jeff Ristine

Whether it involves gender or race, unconscious bias has had an enduring presence in classrooms from the preschool level to college. It afflicts teachers and students alike.

Now the National Science Foundation (NSF) is supporting a San Diego State University researcher whose app — which tracks indicators as granular as how often a teacher or professor calls on each student — aims to gather data to improve classroom equity.

The $961,000, five-year NSF CAREER grant will allow mathematics assistant professor Daniel Reinholz and a University of Washington, Seattle collaborator, Niral Shah, to study in greater depth how to deploy the open-source EQUIP app to improve equity and make educators aware of bias.

“Teachers are some of the hardest working people I know, and they really care about their students,” said Reinholz. “But usually when we plan on teaching a class, we’re not thinking about how our biases could lead us to treat different groups of students inequitably.”

Even unintended bias can lead to patterns set early on which continue into college, defining the expectations from students of certain communities, how actively they participate in class, what career goals they set for themselves, and what they aspire to and ultimately achieve.

Reinholz hopes to change such patterns with EQUIP.

Reinholz, who is part of SDSU’s Center for Research in Mathematics and Science Education, developed the app to track classroom participation and generate real-time analytics based on these inputs that can be used to improve classroom equity.

“Instructors are genuinely surprised when they first receive data about their own classrooms,” Reinholz said. “Even if they are aware of a few dominant students, they may not recognize patterns of racial and gender inequity.”

The app can be used for a wide variety of subjects, not just math.

In the first phase of research under the grant, he will look at improving analytics, and in the second and third phases which will run parallel, he will observe classroom dynamics at SDSU and work with his colleagues to help them understand racial equity patterns.

Reinholz got word of the NSF career grant in May. He sees it as even more relevant today, however, with the burgeoning social movements of the last month as the nation grapples with the racial and social issues underlying a history of police shootings.

“There is structural racism in our society and within our schools,” said Reinholz. Stereotypes lead to biases, he added, that can lead to instructors unconsciously assuming women and girls aren’t as good at math as their male peers, or underestimating the brilliance of Black and Latinx students.

Students can pick up on these biases, and incorrectly believe for instance that the scientists who make discoveries are mostly older white men. This makes for a self-perpetuating cycle of biases that feed wrong beliefs.

Outreach about bias has already been happening at SDSU, thanks to the professors of equity, a faculty group dedicated to teaching their colleagues on diversity, inclusiveness and combating implicit bias. His work through the NSF grant will link back to those efforts in what Reinholz said can be a more “thoughtful” way, sharing data that allows educators to see the nuances of equity.

He will survey colleagues to see what changes result from their engagement with the app, and based on the results, will devise additional interventions as needed. He expects it will take time, and the awareness will percolate slowly before it rises to the top and brings about progressive change.

At the end of five years, he intends to put together a user guide to support other educational institutions using EQUIP for professional development. He will also revise the app and have a better idea of how users leverage the data it generates to reduce bias and promote racial equity when teaching.