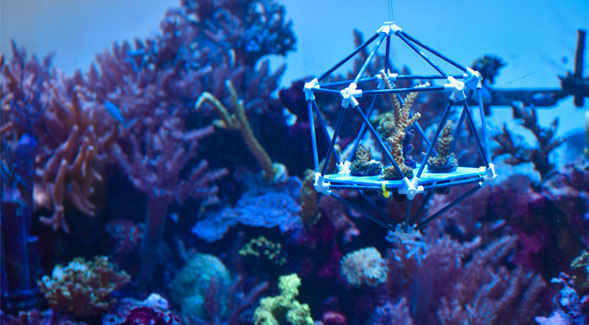 San Diego State University Ph.D. candidate Jason Baer is on a mission to restore coral reefs that have been damaged by climate change, overfishing or tourism by using ark structures, the first of their kind.

Baer and his fellow lab members, led by SDSU microbial ecologist and virologist Forest Rohwer, deploy the large, geodesic structures in the midwater above the ocean floor and seed them with corals and organisms that support their health. The arks, similar to the Noah’s Ark concept, give the threatened communities of coral a second chance to thrive.

Their positioning in midwater, where there’s higher light and flow, offers an improved environment for corals and their allies and distances them from some of the stressors they face on the seafloor, such as sedimentation and suffocation.

Baer, along with Rohwer lab members Anneke van der Geer, Andres Sanchez-Quinto, and Mark Little, spent six weeks in Curaçao, a Caribbean island, working with the CARMABI marine station this past summer. Together they deployed the first arks on coral reefs and began studying the communities that recruited them, with the goal of watching a reef community “build” itself.

“In Curaçao we are using arks to learn how to build a healthy ‘mini reef’ so we can use that knowledge to help restore the surrounding reefs,” Baer said. “Among a variety of factors, we are measuring how arks recruit fish and grazing invertebrates like sea urchins, which are important for keeping the reef clean of algae that compete with the corals for space. The goal is to identify and maximize the conditions on arks that support the growth of a thriving coral reef community.”

Not only can these arks help researchers understand how healthy coral reefs function and grow down to the molecular level, but they may also help provide resources to countries that rely on coral reefs in order to sustain their way of life. Over the last 25 years, more than 50% of the world’s coral reefs have been depleted, resulting in the loss of marine life and valuable resources for coastal communities around the world.

The research team is deploying ark-like seafloor structures in Madagascar, where much of the population experiences major food scarcity, in part because reef degradation and overfishing have depleted the fish populations.

“The project there is oriented at using this concept to recruit fish in order to provide more protein to those communities,” Baer said. “It’s kind of like helping kickstart the reef, so hopefully it will once again be able to provide the services that any healthy reef brings to its surrounding community.”

Rohwer and Harvard research associate Aaron Hartmann originally came up with the coral ark idea, which was rooted in a deep molecular understanding of how coral reefs grow and sustain themselves. Baer joined SDSU’s Ph.D. program in cell and molecular biology under Rohwer in 2018 and began working to design and build the structures shortly after.

“We deployed mini-ark models in our coral aquarium system at SDSU in late 2019 to begin to test the arks concept,” Baer said. “This, among several other tests performed in our coral mesocosm system at SDSU, laid the crucial framework for the development of the arks.”

Since its conception, the project has received more than $9 million in funding from the Department of Defense and the Belmont Forum, a group of national funding agencies around the world including the US National Science Foundation. This funding is now paving the way to creating a tool that, by building healthy pockets of reef biodiversity, could help reseed and repopulate the degraded reefs surrounding them.

Ten years from now, Baer and his team hope to see the coral arks concept in use on reefs all around the world, whether it’s supporting corals for outplanting as coral nurseries, creating structures to recruit fish to the surrounding reefs for communities in need, or even to protect coastlines by slowing wave action.

“The reef is a complex environment and corals rely on a rich community of organisms to help support their health,” Baer says. “What we’re looking towards with the arks, first of all, is a more ecosystem-focused restoration method. Being able to actually move most of your reef biodiversity instead of just a small part of it. The second part is actually increasing the scalability, to use coral arks as both conservation and restoration tools to be able to improve the health of the surrounding reef. ”