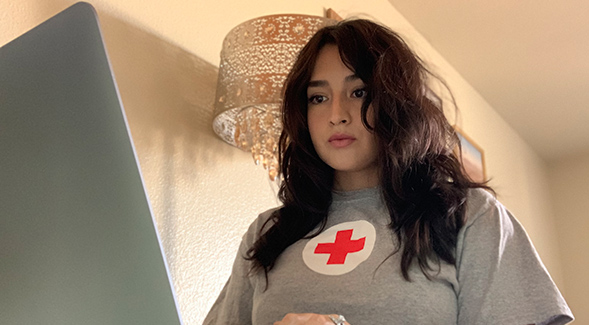 The Graduate Program in Homeland Security placed six students in service with the American Red Cross to assist responders in a wide range of emergencies.

Gabby Smith had just read a news app text message on the horrific migrant-smuggling tragedy in Imperial County: an SUV crammed with 25 people had smashed into a tractor-trailer near the international border, resulting in numerous fatalities.

Five minutes later, she had a role in the emergency response.

Smith is one of six students from San Diego State University’s Graduate School of Homeland Security within the College of Sciences who, as interns for the San Diego/Imperial counties chapter of the American Red Cross this spring semester, direct the deployment of volunteers to emergencies from behind the scenes.

On Mar. 2, Smith was at her parents’ home in Bakersfield — sewing — when she got pinged from a Red Cross national dispatch center.

There would be dozens of first-responders at the emergency scene without access to food or drink; Smith was responsible for coordinating volunteers to pick up food from a nearby Subway shop and provide other much-appreciated canteen services. She remained in touch with the volunteers throughout the day as they assisted as many as 80 law-enforcement personnel, dealing with the deaths of 12 undocumented migrant workers (a 13th died at a hospital).

An internship is required to complete the homeland security program, but for Smith, it also influenced a career choice.

“I went into the program thinking that I wanted to get into federal law enforcement,” she said. “But now that I’m on the verge of graduation I’m really open to any field related to homeland security, whether that’s emergency management, intel or even cyber work. The possibilities are endless. I just want to stay in the field.”

As one of a variety of internships open to Homeland Security students, the Red Cross position has been largely unaffected by COVID-19 restrictions.

Disaster duty officer (DDO) is “a perfect job for students,” said Dave Maloney, senior disaster program manager for the American Red Cross Southern California Region. “They get to do it from the safety and comfort of their own home.”

Students are on call 20 hours a week as DDOs and receive training for the job. The San Diego-Imperial counties chapter responds on average about once daily, Maloney said, but in recent weeks the number has ranged from zero to five. Families displaced by fire are a common call.

Typically, the incident commander at an emergency scene decides the American Red Cross’s assistance would be useful and calls its national dispatch center for an assist. The duty officer gets an electronic alert, goes online for details, decides on a response and then provides information to the volunteers sent to the scene.

For the Graduate Program in Homeland Security, the Red Cross and other programs are about more than just a few months of field work.

“Our students are expected to give back to the community while gaining the experience they need to eventually follow their career dreams,” said Lance Larson, the program’s co-director. “Our students normally find careers in emergency management, homeland security, humanitarian aid, law enforcement, counter-human trafficking and other fields helping people in dire situations around the world.”

It was a busy year for the interns. Among them, Maloney said, were:

• A woman who directed 20 responses during the semester, the most handled by any one student in five years.

• A student who handled response to three home fires in a single day.

• A student whose three tasks in a single overnight shift included a freight train derailment in El Centro with 50 homes evacuated and a brush fire, also in Imperial County, that drew 40 firefighters.

Smith, who lives in Imperial Beach with her U.S. Navy husband Gabriel, enrolled in the graduate program last year and is on track to graduate in May. She got her bachelor’s degree in political science from California State University, Long Beach, but became interested in law enforcement and criminal justice through chats with customers at the coffee shop where she worked.

Smith considered the master’s program in criminal justice but “I was really drawn into what the Homeland Security program offered,” she said.

Smith assisted with another March incident closer to San Diego, a fire in Alpine that wound up displacing multi-generational adults, children and pets from several families. On call as duty officer that night, she checked in with the battalion chief and then met via a videoconferencing platform with others who would attend to the victims’ financial and other needs.

Smith will have finished her required Homeland Security internship at the end of the semester, but was so valued in the Alpine emergency that the battalion chief urged her to continue volunteering outside of her required hours.

She’s taking them up on the suggestion.