The SDSU-led research has been published in the Astronomical Journal.

Astronomers have discovered a third planet in the Kepler-47 system, securing the system’s title as the most interesting of the binary-star worlds. Using data from NASA’s Kepler space telescope, a team of researchers, led by astronomers at San Diego State University, detected the new Neptune-to-Saturn-size planet orbiting between two previously known planets.

With its three planets orbiting two suns, Kepler-47 is the only known multi-planet circumbinary system. Circumbinary planets are those that orbit two stars.

The planets in the Kepler-47 system were detected via the “transit method.” If the orbital plane of the planet is aligned edge-on as seen from Earth, the planet can pass in front of the host stars, leading to a measurable decrease in the observed brightness. The new planet, dubbed Kepler-47d, was not detected earlier due to weak transit signals.

As is common with circumbinary planets, the alignment of the orbital planes of the planets change with time. In this case, the middle planet’s orbit has become more aligned, leading to a stronger transit signal. The transit depth went from undetectable at the beginning of the Kepler Mission to the deepest of the three planets over the span of just four years.

The SDSU researchers were surprised by both the size and location of the new planet. Kepler-47d is the largest of the three planets in the Kepler-47 system.

“We saw a hint of a third planet back in 2012, but with only one transit we needed more data to be sure,” said SDSU astronomer Jerome Orosz, the paper’s lead author. “With an additional transit, the planet’s orbital period could be determined, and we were then able to uncover more transits that were hidden in the noise in the earlier data.”

William Welsh, SDSU astronomer and the study’s co-author, said he and Orosz expected any additional planets in the Kepler-47 system to be orbiting exterior to the previously known planets. “We certainly didn’t expect it to be the largest planet in the system. This was almost shocking,” said Welsh. Their research was recently published in The Astronomical Journal.

With the discovery of the new planet, a much better understanding of the system is possible. For example, researchers now know the planets in in this circumbinary system are very low density – less than that of Saturn, the Solar System planet with the lowest density.

While a low density is not that unusual for the sizzling hot-Jupiter type exoplanets, it is rare for mild-temperature planets. Kepler-47d’s equilibrium temperature is roughly 50º F (10º C), while Kepler-47c is 26º F (32º C). The innermost planet, which is the smallest circumbinary planet known, is a much hotter 336º F (169º C).

The inner, middle, and outer planets are 3.1, 7.0, and 4.7 times the size of the Earth, and take 49, 87, and 303 days, respectively, to orbit around their suns. The stars themselves orbit each other in only 7.45 days; one star is similar to the Sun, while the other has a third of the mass of the Sun. The entire system is compact and would fit inside the orbit of the Earth. It is approximately 3340 light-years away in the direction of the constellation Cygnus.

“This work builds on one of the Kepler’s most interesting discoveries: that systems of closely-packed, low-density planets are extremely common in our galaxy,” said University of California, Santa Cruz astronomer Jonathan Fortney, who was not part of the study. “Kepler 47 shows that whatever process forms these planets – an outcome that did not happen in our solar system – is common to single-star and circumbinary planetary systems.”

This work was supported in part by grants from NASA and the National Science Foundation. 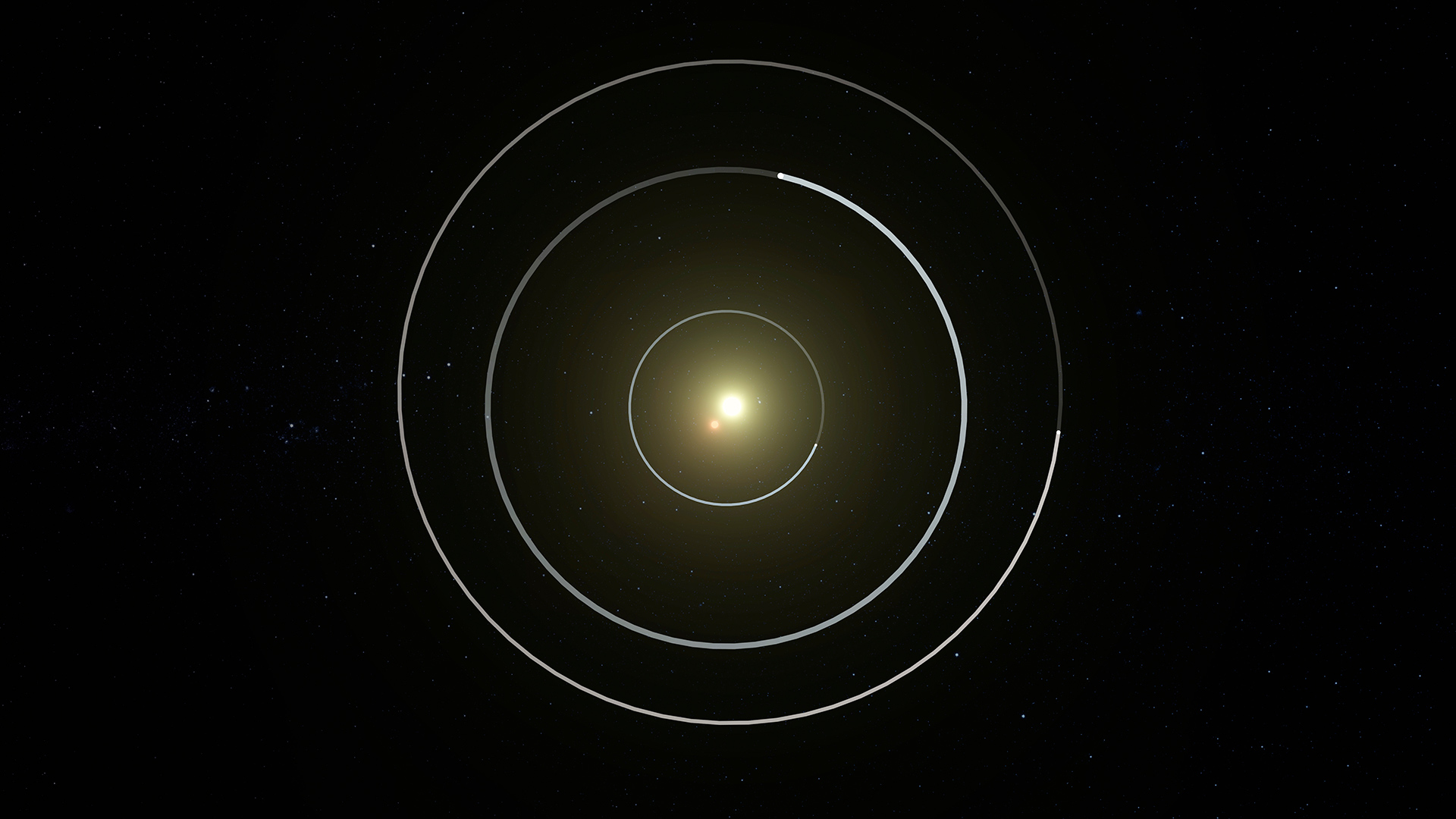 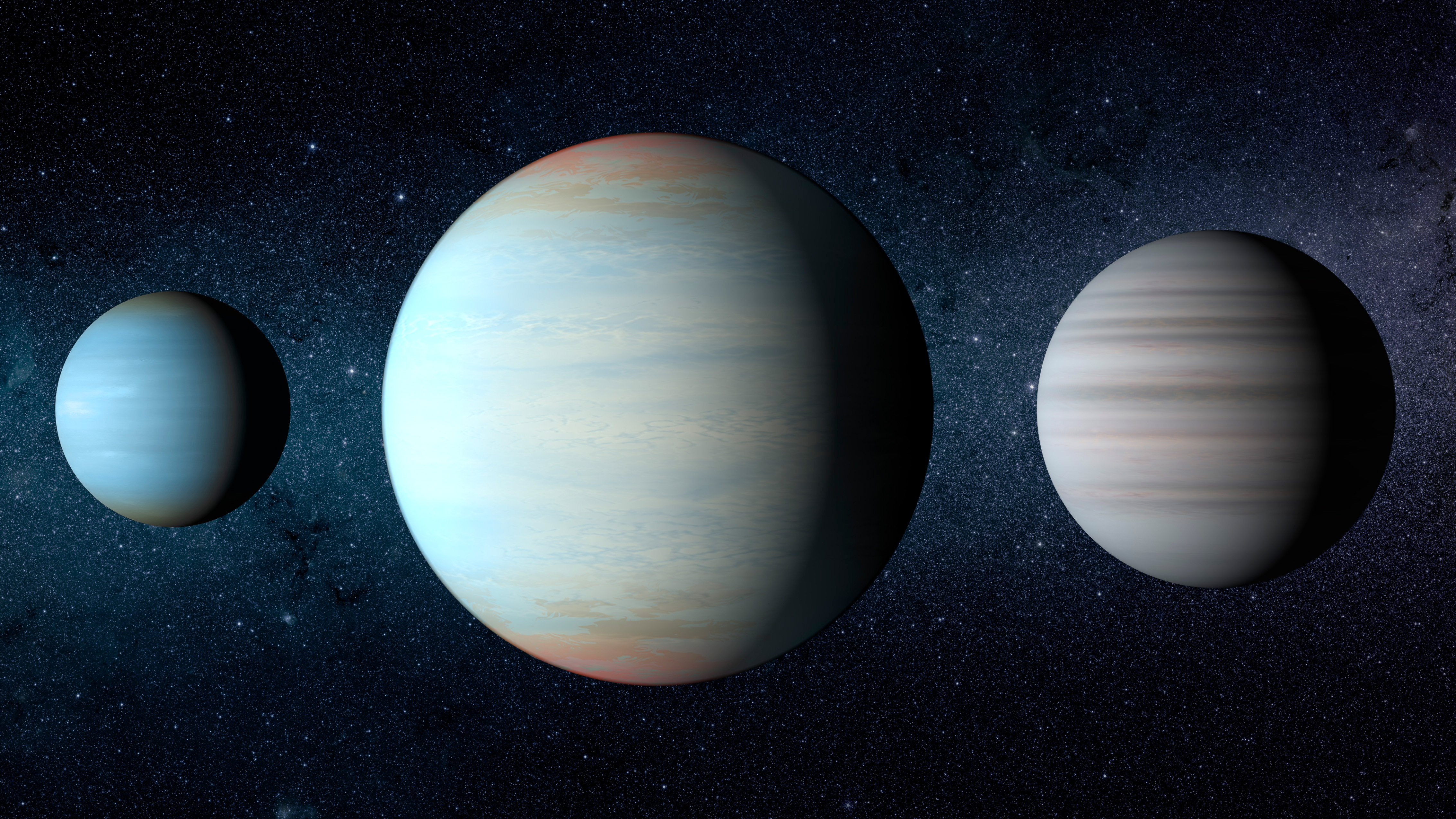 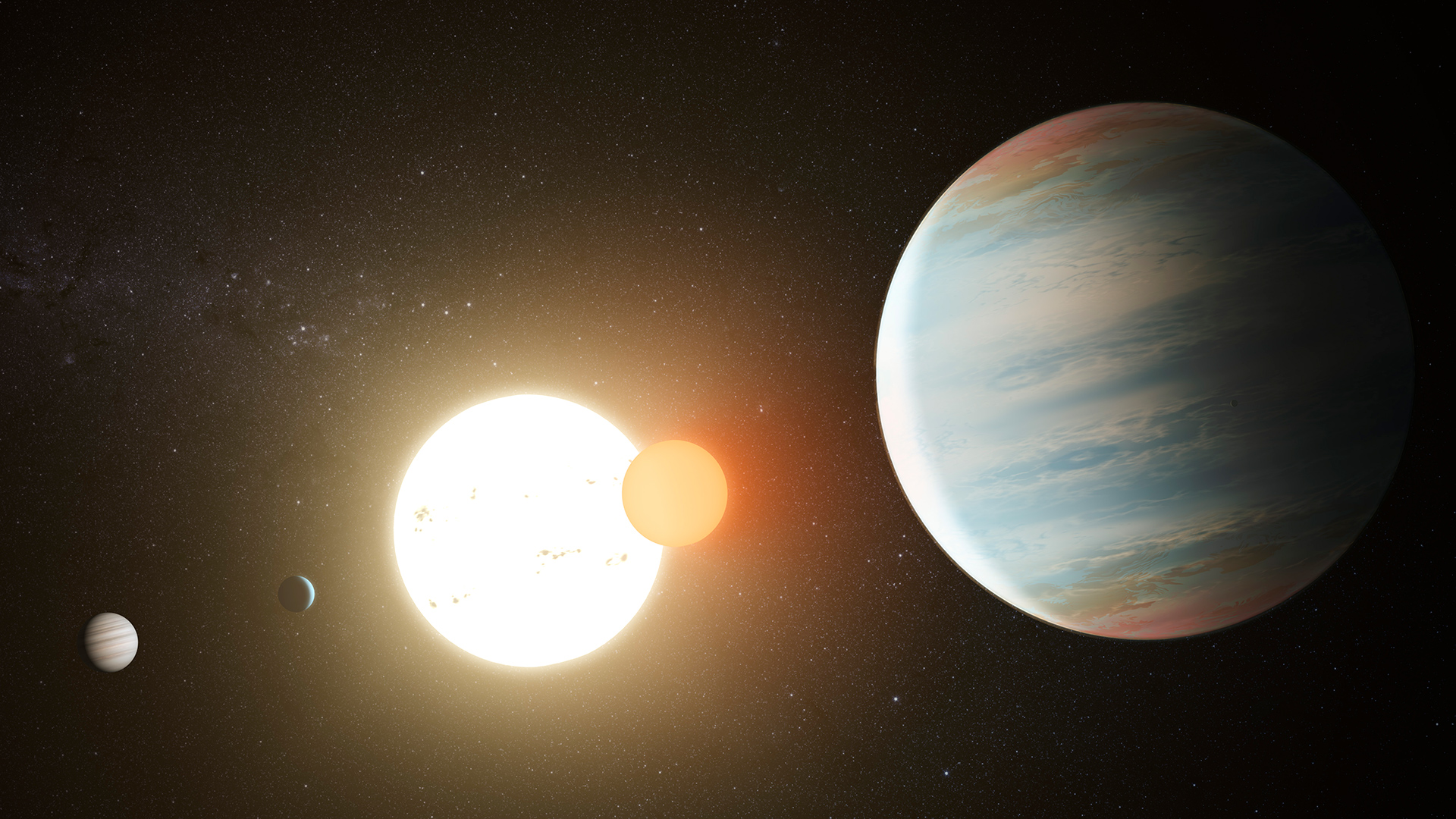