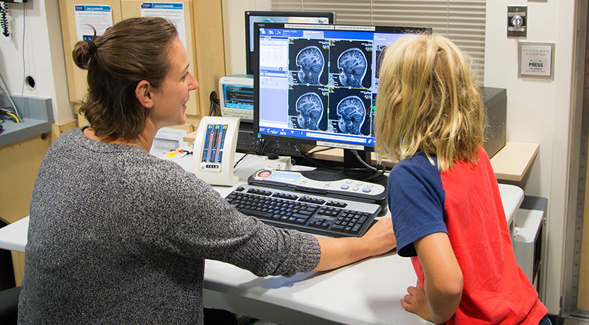 Psychologist Inna Fishman’s research indicates the presence of biological markers in the brain in children with autism.

Think of the brain as a complex transportation hub, a place where neural traffic heads off in any number of directions to make connections while processing something as simple as a mother’s smile.

Now consider the same center in a child with an autism spectrum disorder (ASD). At a time different parts of the brain are supposed to be talking to each other or working together, this traffic—the communication between different regions of the brain—takes unexpected exits and detours for no apparent reason.

A team of San Diego State University researchers, studying MRI scans of school-age children’s brains, found just such unique patterns of neural communication involving the amygdala, the area of the brain responsible for processing social information. In children with ASDs, the amygdala connections with other parts of the brain proved to be weaker with some regions —and stronger with others—when compared with typically developing children of the same age.

A region of the brain showing marked differences connecting with the amygdala was the occipital cortex, located in the rear of the brain. It is involved in encoding facial expressions, gaze and other facial cues, said SDSU psychologist Inna Fishman, who led research.

The findings point to possible brain “markers” for autism spectrum disorders to further characterize the condition in biological and not just behavioral terms. Fishman said such markers could potentially become a tool in identifying autism in children with this developmental disorder, which can impair social communication and interaction.

“The patterns of amygdala connections are very unique in autism,” said Fishman. “What we found is not necessarily something I would predict. We measured connections of the amygdala with the entire brain, and the findings with the visual cortex kind of surprised me.”

Fishman, co-author Ralph-Axel Müller, along with colleagues contributing to the research, published their results in the Journal of the American Academy of Child & Adolescent Psychiatry.

Fishman is founding director of the SDSU Center for Autism, an interdisciplinary group of researchers and clinical scientists from multiple SDSU colleges and departments. Müller is director of SDSU’s Brain Development Imaging Laboratories. The work was supported by grants from the National Institutes of Health.

Results were based on brain imaging from 55 children, aged 7 to 17, identified with ASDs and compared with 55 typically developing children of the same age.

The functional MRI used in the research measures how brain activity changes over time—in this case, a period of six minutes. It provides a picture of ongoing communication between different brain regions, known as “functional connectivity,” showing how synchronized the amygdala’s activity is with other brain areas.

This absence of a continuing brain maturation associated with typical adolescence could contribute to the social communication difficulties experienced by those with ASDs as they reach their teenage years and young adulthood, Fishman said.

Fishman emphasized there may be some form of disrupted coordination between the amygdala and other points in the brain, though it’s not yet possible to say whether this causes any of the differences in social functioning seen in children with ASDs.

That’s partly because of the age of the children in the study. “Having scanned kids who are 10, 12 or 14 years old, and having found differences at this age doesn’t allow us to make inferences about what might have caused these differences to emerge in the first place,” she said. “By that point, the connections in the brain are formed and already quite established.”

As a follow-up, Fishman is studying brain connectivity and organization in toddlers and preschoolers with ASDs, when their autism symptoms first manifest. She hopes to learn more about whether the early behaviors seen in children with ASDs lead to the atypical connection patters or the other way around.

Overall, understanding the biology behind ASDs “brings us closer, incrementally” to improved clinical decisions concerning diagnosis or prognosis of ASDs, and possibly to more targeted, tailored interventions focusing on specific brain circuits based on the level of unique brain connections identified in the brain, Fishman said.

“What we found is not necessarily something I would predict. We measured connections of the amygdala with the entire brain, and the findings with the visual cortex kind of surprised me.”