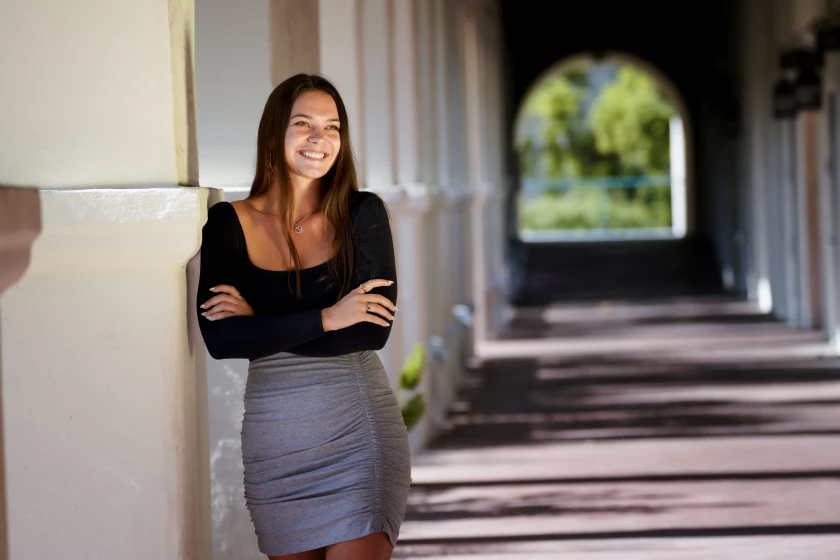 A newly graduated San Diego State University alum has raised $1.6 million — largely through her Twitter following — to invest in startups founded by diverse people rarely seen in the entrepreneurial world.

Paige Finn Doherty, a 22-year-old computer science major, collected the money from angel investors who follow her investing advice on social media. She founded Behind Genius Ventures, what she calls a “Gen Z fund,” with partner Josh Schlisserman and invested in four startups.

But how does a software student end up knowledgeable enough to hand out investing advice?

Unlike many students who never work real jobs until graduating, Doherty began working at the aerospace and defense company Northrop Grumman at only 17 years old, first as an intern and later as a full-time employee. She worked in various roles from project management to technical writing to training groups of interns.

But after feeling a growing apathy toward the minutia of mechanical engineering, she decided to switch gears from the highly technical to the entrepreneurial. She joined SDSU’s Venture Capital Investment Competition with a team of her peers.

Before the big night on stage, her adviser sent an email about what to wear: a blue shirt, khaki pants and a Patagonia vest. “Sorry Paige,” he wrote. “I couldn’t find much about what women venture capitalists wear.”

“It sounds like a little thing, but it was representative of a disparity in the industry,” Doherty said. “I learned that only 11 percent of venture capital decision-makers are women, and I think that corresponds to an equal disparity to the companies that get funded.”

That experience vaulted Doherty into studying venture investing. Her team won the competition, and she got scooped up by one of San Diego’s biggest tech VC funds, TVC Capital, to work as an intern.

“Paige was eager to learn all aspects of being an institutional investor,” said Mykel Sprinkles, a partner at TVC Capital. “She had great soft and people skills to pair with her technical background. Paige established several relationships with prospect investment companies and helped further some of our data analytics throughout our diligence processes.”

Doherty said she learned that her technical experience — especially in software engineering — was valuable at investment firms that focus on tech startups.

“Talking to other venture funds, for the most part, traditional investors come from investment banking then moved to growth equity and venture,” Doherty said. “So they’re career venture capitalists. Some of the founders I talked to were excited that I could go more into the weeds on their product.”

Throughout this experience, Doherty was building a following on Twitter. She asked her audience what they wanted to learn about certain topics in investing. Then she interviewed experts and put together educational content. She now has over 14,000 followers.

It was from this pool of people that Doherty got connected with angel investors who wrote checks for her first fund through Behind Genius Ventures. Although Doherty can’t speak about open rounds of fundraising publicly, a public document filed with the U.S. Securities and Exchange Commission confirmed her first closed round was $1.6 million.

Doherty and her 18-year-old brother, Owen Doherty, are self-publishing a 40-page educational picture book for adults about venture capital investing. It’s called Seed to Harvest. Its text is written by Paige, while the anime-style illustrations are done by Owen, a Rancho Bernardo High School student.

The duo chose to illustrate the book with diverse characters.
“Although venture doesn’t look like that right now, it’s what I’d like it to look like in the future,” Doherty said.

“These founders have been undervalued and under-invested in the past, even though they have shown to be more capital efficient,” Doherty said. “It’s just good business.”

The fund has invested in four startups in wellness tech and software development tools, among other areas. Doherty declined to disclose the company names.

Paige Doherty and her 18-year-old brother, Owen Doherty, are self-publishing a 40-page educational picture book for adults about venture capital investing. The duo chose to illustrate the book with diverse characters.(Courtesy of Paige Doherty)